Leprechauns are protected under European law

A group of lobbyists managed to get Ireland's mystical little people protected by EU Law. 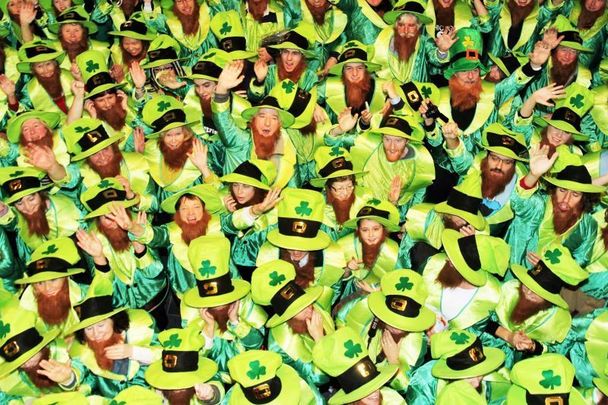 Here's a little-known fact: Leprechauns, or little people, and their heritage are protected on a European directive thanks to a group of lobbyists from Carlingford, County Louth.

The leprechaun site and local economy have benefited greatly over the years from the connection with Ireland’s mythical little creature.

The directive was part of an effort to preserve the rich biodiversity of the area called "The Sliabh Foy Loop,” now a protected area for flora, fauna, wild animals, and leprechauns.

“It is a long, detailed procedure and it has taken nearly eight years to secure the future of our heritage, culture, and folklore. We are delighted in the knowledge that our little people will be protected from extinction and allowed to thrive on the mountains,” local man Kevin Woods said of the directive in 2011.

The group of locals who lobbied for this protection directive, and also organize the annual Leprechaun Hunt in the area, said the directive was put through in spite of objections from the Black-Faced Mountain Sheep Breeders Association.  Their site says, “The EU has opted in favor of the rich bio-diversity of the Cooley Mountains, and this area is now protected under the European Habitats Directive."

Woods, a local man and one of the original members of the group, explains in the video below that there are only 236 leprechauns still living in Ireland on the Foy mountain at Slate Rock. He believes that this place is of the spirit world.

The story goes that in 1989 P.J. O'Hare, a local businessman and publican, was upon Carlingford mountain when he heard a scream coming from the area beside the Wishing Well.

Being curious, he went to investigate and found a patch of burnt ground. Beside this patch, he found a little hat, jacket, and trousers with four gold coins in the pockets. The whereabouts of these four coins are only known to one other person, but he maintains he can't give away the secret. The clothes of "The Naked Leprechaun" are on display at PJs Pub in Carlingford.

The discovery of this suit led to the establishment of the Carlingford National Leprechaun Hunt when hundreds of people descend on Carlingford in search of "The Naked Leprechaun.”

In addition to being named a protected area for leprechauns, the Sliabh Foy Loopit is also a beautiful tourist spot filled with natural wonders. Frances Taylor, Cooley Peninsula tourism officer said, “This is another significant recognition from Europe in regards to our heritage and tourism product and the way in which it is responsibly managed.

“While we are delighted with the increase in visitors that are discovering this area as one of Ireland’s most beautiful hidden gems, we are committed to sustainable and responsible tourism. We believe it is vitally important to be sensitive to the environment and all inhabitants within the destination.”