In the immortal words of the song performed by Marilyn Monroe, “Happy Birthday Mr. President.” 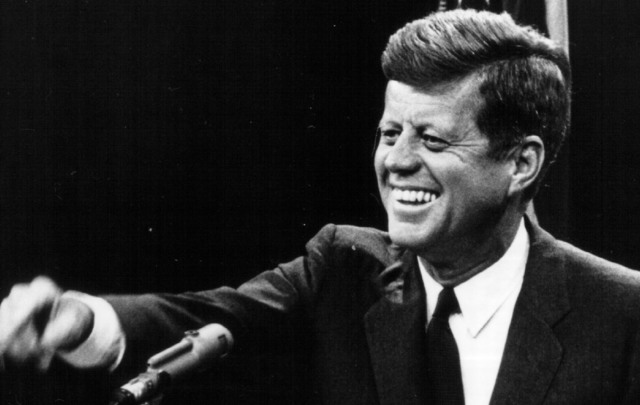 In his birthplace, Brookline, MA, John F Kennedy started his life on this, May 29, in 1917. Happy birthday to the 35th US President!

Today, May 29, marks what would the 102nd birthday of the former United States President JFK.

If it had not been for that fateful day, November 22, 1963, who knows what would have happened in the world, but by now JFK would have been celebrating his 102nd birthday. The 35th President of the United States Kennedy was the first Catholic, and also the youngest, to hold the coveted White House role.

Although he was in office for only two and a half years, notable events in US history took place including: the Bay of Pigs Invasion, the Cuban Missile Crisis, the Nuclear Test Ban Treaty, Police Week, the establishment of the Peace Corps, the Space Race, the building of the Berlin Wall, the African-American Civil Rights Movement, the desegregation of Mississippi University and the increased U.S. involvement in the Vietnam War.

Of course, apart from being a symbol of change and hope for a nation, JFK is also held close to the Irish community's heart due to his proud Irish ancestry. The Kennedy family hailed from Dunganstown, County Wexford.

In 1848, Patrick Kennedy left his farm and boarded a ship in New Ross, at the height of Ireland’s Great Hunger. He was bound for Liverpool on his way to Boston. The rest is history!

In the words of Marilyn Monroe's infamous performance of the song, “Happy Birthday Mr. President”:

Here are a few favorite quotes from JFK:

- “In the long history of the world, only a few generations have been granted the role of defending freedom in its hour of maximum danger. I do not shrink from this responsibility – I welcome it.”

- “Forgive your enemies, but never forget their names.”

- “I believe in an America where the separation of church and state is absolute where no Catholic prelate would tell the President how to act, and no Protestant minister would tell his parishioners for whom to vote where no church or church school is granted any public funds or political preference and where no man is denied public office merely because his religion differs from the President who might appoint him or the people who might elect him.

“I believe in an America that is officially neither Catholic, Protestant nor Jewish where no public official either requests or accepts instructions on public policy from the Pope, the National Council of Churches or any other ecclesiastical source where no religious body seeks to impose its will directly or indirectly upon the general populace or the public acts of its officials and where religious liberty is so indivisible that an act against one church is treated as an act against all. For while this year it may be a Catholic against whom the finger of suspicion is pointed, in other years it has been, and may someday be again, a Jew or a Quaker or a Unitarian or a Baptist. It was Virginia’s harassment of Baptist preachers, for example, that helped lead to Jefferson’s statute of religious freedom.

“Today I may be the victim but tomorrow it may be you until the whole fabric of our harmonious society is ripped at a time of great national peril. Finally, I believe in an America where religious intolerance will someday end where all men and all churches are treated as equal where every man has the same right to attend or not attend the church of his choice where there is no Catholic vote, no anti-Catholic vote, no bloc voting of any kind and where Catholics, Protestants and Jews, at both the lay and pastoral level, will refrain from those attitudes of disdain and division which have so often marred their works in the past, and promote instead the American ideal of brotherhood.

“That is the kind of America in which I believe. And it represents the kind of Presidency in which I believe a great office that must neither be humbled by making it the instrument of any one religious group nor tarnished by arbitrarily withholding its occupancy from the members of any one religious group. I believe in a President whose religious views are his own private affair, neither imposed by him upon the Nation or imposed by the Nation upon him as a condition to holding that office.”

- “The ignorance of one voter in a democracy impairs the security of all.”

- “Let every nation know, whether it wishes us well or ill, that we shall pay any price, bear any burden, meet any hardship, support any friend, oppose any foe to assure the survival and the success of liberty.”

Read more: John F. Kennedy establishes the Peace Corps on this day in 1961

JFK with his children JFK Jr and Caroline in the Oval Office. Image: National Archives.

- “If a free society cannot help the many who are poor, it cannot save the few who are rich.”

- “This country cannot afford to be materially rich and spiritually poor.”

- “Failure has no friends.”

- “Our problems are man-made, therefore they may be solved by man. No problem of human destiny is beyond human beings.”

- “The supreme reality of our time is the vulnerability of this planet.”

- “World peace, like community peace, does not require that each man love his neighbor -- it requires only that they live together with mutual tolerance, submitting their disputes to a just and peaceful settlement.”

- “Efforts and courage are not enough without purpose and direction.”

- “When we got into office, the thing that surprised me most was to find that things were just as bad as we'd been saying they were.”

- “In giving rights to others which belong to them, we give rights to ourselves and to our country.”

What is your favorite achievement of JFK's? Tell us about it in the comments section, below.