Interested in the history behind your Irish family name? Find out more about the Feeney clan. 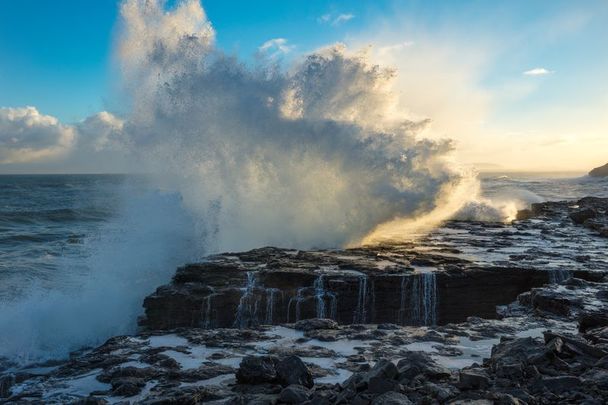 Waves crashing at the village of Easkey in County Sligo, a county synonymous with the Irish surname Feeney. Ireland Content Pool / Tourism Ireland.

Everything you need to know about the Irish surname Feeney.

The surname Feeney is one of the most common names in Counties Sligo and Mayo.

Taken from the original Gaelic form, O Fiannaidhe, meaning "soldier, "the clan originated from the population group Ui Fiachrac, and it has been established that this sect was located in the Connaught province. Other Feeney derivations can be found in Galway from the O'Fidhne and in Co. Roscommon with the O'Fighne.

In ancient Irish times, with Feeney appearing in so many different counties, it became difficult to discern exactly where one's clan came from. One clue to its original roots is the location of two towns named Ballyfeeney in Roscommon, which is an Anglicization of the word Baile Feeney, which translates into town of Feeney. The name was more common in the past and appears frequently in the Elizabeth Fiants and in the census of 1659.

Chuck Feeney, one of the most generous philanthropists of our generation, is unlike many high-profile celebrities, who give far less. Feeney prefers his quiet, under-the-radar sort of giving. Author and historian, Brian Feeney has written an interesting book about the history of Sinn Fein, titled, fittingly enough, "Sinn Fein: A Hundred Turbulent Years." In his work, he traces the colorful and influential people who have been members of the party, from Eamon de Valera to Martin McGuinness. His other book on Northern Ireland is called the "Pocket History of the Troubles."

Kathy Feeney, also a writer, is known for her children's books about animals. She has published over 25 books detailing wildlife ranging from lions to manatees and is noted for her willingness to visit schools. For adults, she also has written numerous travel articles, many of which chronicle her trips to China.

Other Feeneys have made their mark in the land of football. The Belfast-born soccer forward Warren Feeney, a member of Luton Town, has become an oft gossiped about player. Where he will play next has the soccer message boards buzzing. Meanwhile, Cullen Feeney, a player on Irish League powerhouse Portadown, played a crucial role in his club's championship win this past season.

On both sides of the Atlantic, Feeneys are represented in politics. Geraldine Feeney is a member of the Seanad, the upper house of the Irish Parliament from the political party Fianna Fail. On the Irish-American side, Tom Feeney is a Republican representative from Florida. The Cuban population he represents has shown support for him in the past for his commitment to their causes.

The tunes of Feeneys can be heard in all genres of music. One group, Dennis Feeney and the Den Dogs, incorporates traditional American southern rock with an indie rock twist. Labor activist and singer, Anne Feeney has shown her versatility, writing with the protest spirit of the sixties, but infusing her music with Irish traditional music, ska, and even hip-hop elements. Jack Feeney, an Irish tenor who immigrated to the United States in the 1920s, became a radio celebrity, and frequently sold-out Carnegie Hall with his classical repertoire. He also earned money with his own radio show that was sponsored by the Schaefer Company, a German beer brewers that used Feeney to tap into the Irish immigrant market.

The Feeney name has been a storied name throughout history. The clan has made their mark on both sides of the pond, and all walks of life have been noted.

Are you a member of the Feeney clan? Let us know in the comments, below!