The myths and legends of Ireland's hound of deep, the Dobhar Chu

Some believe the ancient Irish creature of folklore, Dobhar Chu, is like an Irish Loch Ness monster. 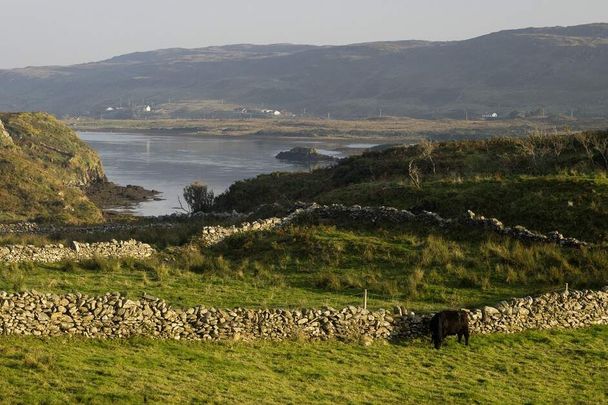 Streamstown Bay on Omey Island in Connemara, where a Dobhar Chu was spotted in 2000. Tourism Ireland

Although Irish folklore is littered with legendary ghoulish water creatures, few are as scary as Dobhar Chu (pronounced do-war coo). Considered by some to be Ireland’s version of the famous Loch Ness monster, Dobhar Chu is a mythical lake monster that has inhabited lakes of the British Isles since ancient times.

The name, Dobhar Chu, roughly translated means ‘water hound’, or ‘hound of deep’. Thought to be a cross between a giant otter and a hound, Dobhar Chu is about seven-foot-long, or about the size of a crocodile. In fact, it is also known as the Irish crocodile.

The Dobhar Chu is a blood-thirsty, gruesome creature that lives deep in waters of a lake, river, or even sea and is known to be able to travel great distances in water or on land. This monster hound is known for its speed, aggression, and appetite for human flesh. There are usually two of these creatures, and when one is killed, its mate will swim up from depths of water and avenge the killing by pursuing its attacker, killing him and often eating him. This happens because, when Dobhar Chu is about to die, it gives off an eerie high-pitched whistle to warn its mate.

Like legendary Bigfoot and many other creatures, Dobhar Chu is known as a cryptid, a term that refers to a creature, or plant whose existence is unrecognized by scientific consensus and is usually regarded as highly unlikely. Yet in Glenade, County Leitrim, in northwest Ireland there is evidence to suggest its existence.

Reports of sightings of Dobhar Chu date back as far as 1684. One was recorded by Miss Walkington, in the 1896 edition of The Journal of Royal Society of Antiquaries of Ireland. Miss Walkington described it as being "half-wolfdog and half-fish". A few months afterward Mr. H. Chicester Hart responded to Miss Walkington’s letter. He said that he heard rumors about a gruesome creature called Dobhar Chu which is said to be king of all lakes and father of all otters.

The creature is believed to live in many lakes around Ireland. Sraheens Lough, Achill Island, in County Mayo is where the largest number of, as yet, unsubstantiated modern sightings in Ireland have been. Apparently, a small population of Dobhar Chu lives in Sraheens Lough, though it is believed that they are migratory, not living in the lake all year.

As recently as 2000, Irish artist Sean Corcoran and his wife claimed to have witnessed a sighting of a Dobhar Chu in a lake on Omey Island in Connemara, County Galway. Corcoran describes it as large, dark, and with orange flippers. “The creature,” reports Corcoran, “swam width of the lake from west to east in what seemed like a matter of a few seconds.” Corcoran concludes that it finally leaped onto a huge boulder and before disappearing gave “most haunting screech”.

More frightening than Selkies (seals who can take the form of humans), or famous Kelpies (mythical water horses said to inhabit rivers and lakes of Scotland and Ireland), Dobhar Chu is considered to be an immature form of the famous Lough Ness monster, affectionately known as Nessie. There is also a further interesting link between Ireland and these two monsters which continues to this day. The link begins with the first sighting of the Loch Ness monster in Scotland in the 7th century by Irish missionary St. Columba (see box at bottom of page). Columba was also the first to challenge and overcome the Loch Ness monster; by using his spiritual powers Columba miraculously saved a man from being devoured by the monster. This story leads to another myth that Nessie’s offspring came to the lakes of Ireland to avenge St. Columba’s actions.

Lest you think that Dobhar Chu is just another imaginary fable, be aware that there is some evidence to suggest it may be real. What is more, another theory suggests that this creature travels extensively. Some researchers, for example, connect the famous lake monster Bessie which is said to inhabit Lake Erie in the US with Irish Dobhar Chu. There have been several sightings of this large serpentine monster that followed Irish emigrants to the heartland of America. An unconfirmed sighting of Bessie describes a terrifying encounter with a huge lake creature that killed three people in 1992. A more elusive but similar, sinister creature has apparently been attacking swimmers in Pump House beach near Port Dover in Canada since August 2001. Other reports document that these creatures inhabit various scattered locations all over New England and as well as all the Great Lakes region.

However, of all sightings of Dobahr Chu, it is the account in Glenade, County Leitrim of 1722 of the bestial murder of Grace McGloighlin that is most famous. Oral tradition in this part of Ireland still holds that story of The Dobhar Chu of Glenade is true. This is the story as related by local storyteller Owen McGowan of the townland of Ahanlish, Kinlough, Co. Leitrim.

Grace McGloighlin, known as Grace or Gráinne Connolly (custom at a time was that a woman retains her maiden name after marriage), lived in the townland of Creevelea which is close to the border of Leitrim and Sligo, and on the northwestern part of Glenade Lake. On September 22nd, 1722, Grace came down to the lake to bathe and perhaps wash some clothes. While she was doing this a huge monster emerged from the water and savagely attacked, then killed Grace. She was later found by her husband Terence. Terence saw her bloodied body on side of the lake and to his horror saw the huge beast which had killed his wife lying asleep across her dead body. Heart-broken with grief and fury, Terence knew at once that it was a Dobhar Chu.

Terence immediately found his dagger and killed the monster. However, as is usual with this kind of creature, during its death throes it let out a high-pitched whistle which alerted its mate to what was happening. A second Dobhar Chu emerged at once from the depths of the lake. Terrified, Terence took to his heels and jumping on a horse began to ride for his life as second Dobhar Chu pursued him. Terence rode for many miles, with Dobhar Chu close behind him. A local man, Patrick Doherty (now deceased), told historian and folklorist Joe McGowan's story of chase. It started at Frank McSharry’s of Glenade, faltered, and ended close by Cashelgarron stone fort in Co. Sligo at a blacksmith’s forge.

After being chased for miles Terence was obliged to stop to have his horse’s foot re-shod. The blacksmith at Cashelgarron, a wise man, knew the ways of this creature. He gave Terence a sword and told him: “When creature charges, he’ll put his head right through the horse. As soon as he does this, you be quick and cut his head off.” Terence, still on his horse stood his ground near the forge. The huge beast came at full charge then it put its head right through the horse, as predicted by the blacksmith. This time, however, Terence was ready. Determined to avenge his wife’s murder Terence put his sword through Dobhar Chu’s head, killing it instantly.

There is further ghoulish detail to back up the story. The grave of Grace Connolly actually exists. What’s more, carved on her tombstone is a detailed depiction of her killer, Dobhar Chu. It is located in Conwall cemetery in the townland of Drummans. Drummans near the village of Kinlough is part of the approach to Valley of Glenade. The tomb itself is so old that most of the written details are illegible. However, Grace’s name and that of her husband can be made out. The carved image of Dobhar Chu is much clearer. The creature is depicted lying down with its head and neck flung backward so that it lies flat along its back in its death throes. A spear-like weapon is shown piercing the base of the creature’s neck, reemerging below its body, and gripped by a human fist at its upper end. Also and less well known, both Dobhar Chu and McGloighlin’s horse are buried in Co. Sligo, not far from Cashelgarron stone fort where they were both killed.