John F Kennedy’s patrol torpedo boat was attacked by the Japanese, it was Bud Liebenow who came to save him. 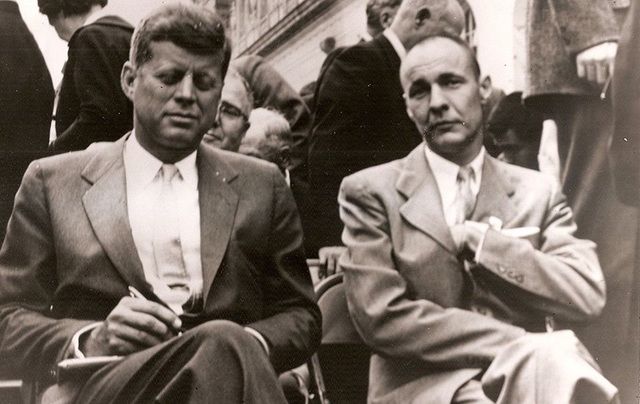 A 97-year-old veteran of World War II who saved the life of future President John F. Kennedy has died. William "Bud" Liebenow served in the Navy and led a rescue party to find Kennedy after his patrol torpedo (PT) boat had been attacked by Japanese.

The pair stayed in intermittent touch over the years and a still grateful JFK invited Liebenow to attend his Inauguration as President in 1961.

Initially the young Jack Kennedy looked set to sit out the Second World War behind as desk, in a uniform but still pushing paper for the United States Navy. His father Joseph was having none of that. How could Jack expect to be a politician, let alone Commander-in-Chief, if he did not see action? He had to look bereaved mothers, grieving widows and wounded warriors in the eyes when he asked for their votes and he if he spent the conflict behind a desk many would ask what had he sacrificed for his country?

So despite his constant problems with his back he volunteered to serve on PT boats in the Pacific. For a rich kid from New England who sailed on summer holidays he expected the job to be right up his street. His fellow recruits took to him but nicknamed him “shafty” after he complained of being “shafted” after he wasn’t chosen for one mission.

Eventually given the all clear to command a PT with a crew of a dozen men off the coast of the Solomon Islands. One routine patrol turned to tragedy when a Japanese left two members of Kennedy’s crew dead and the remaining ten panicking for their lives.  “There's nothing in the book about a situation like this. A lot of you men have families and some of you have children. What do you want to do? I have nothing to lose."

The crew decided not to surrender, fought on and made it to an island some three miles away. It was there they were rescued by William "Bud" Liebenow.

Still of William "Bud" Liebenow from a local TV station.

Liebenow was a Virginia man who had been at Pearl Harbor when attacked by the Japanese. He died in Mount Airy, North Carolina this Sunday following a bout of pneumonia. Ar dheis Dé go raibh a anam.