John and Jackie Kennedy suffered the heartbreak of a stillbirth one year before Caroline Kennedy was born. 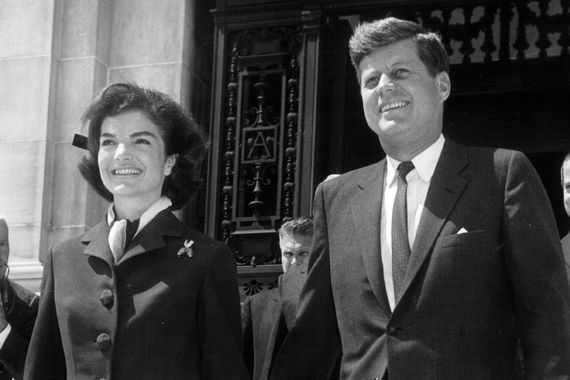 One year before John and Jackie Kennedy welcomed Caroline to the world in 1957, the couple suffered the heartbreak of a stillbirth when their first daughter - later referred to as Arabella - died at birth.

The couple never officially named her stillborn daughter, and the name Arabella Kennedy appears on no birth certificates, but Jackie would later refer to her lost first-born with the sentimental name of Arabella.

Jackie Kennedy had already suffered one miscarriage in 1955 when she fell pregnant with Arabella, losing the baby in the first trimester of her pregnancy.

She navigated the first two trimesters of her pregnancy when she fell pregnant with Arabella, who was due in September 1956.

It was in the third trimester, however, when things started to go wrong and Jackie's pregnancy came to a heartbreaking end on August 23, 1956, when she awoke to heavy bleeding.

Her daughter was delivered by caesarian section in the Newport Hospital Emergency Department in Rhode Island. The baby was stillborn.

John F. Kennedy was holidaying in the Mediterranean when Jackie went into labor.

The future President, who was cruising through the Mediterranean on a yacht, returned to America at the behest of his friends, who reportedly encouraged him to return to his grieving wife.

"You better haul your ass back to your wife if you ever want to run for president," Kennedy's friend George Smathers reportedly said.

In any event, Kennedy did return to America and, one year later, the couple had their first child - a daughter named Caroline.

Three years later, the couple had John, their first son.

John and Jackie Kennedy would suffer the heartbreak of infant mortality once more in 1963, just 15 weeks before the President was assassinated in Dallas.

Patrick Kennedy was born three weeks premature and died from respiratory distress syndrome shortly after his birth. His death would inspire John F. Kennedy to sign a grant into law that would give $265 million to newborn baby research, helping to save countless young lives.

The stillborn baby was transferred from a cemetery in Newport, Rhode Island, to the massive military graveyard where her headstone simply reads "daughter."

The widowed First Lady reportedly didn't want to mark her stillborn daughter's grave with an informal nickname that her husband may not have even been aware of.

Jackie may have never even written the name down on any record, but she did use it when referring to her stillborn daughter among her closest friends and family.