Where did Washington’s favorite politician John F. Kennedy hang out?

Just some of the places in Washington, D.C., where JFK lived, ate and worshiped: 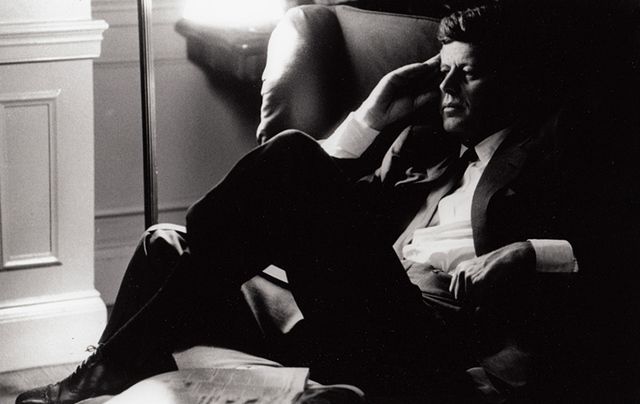 Here are some of the places in Washington, D.C., where JFK lived, ate and worshiped:

In October 1941, when John F. Kennedy was 24 years old, he moved to D.C. to take a position in the Office of Naval Intelligence. He moved in with his younger sister Kathleen, who was already living in the capital and working for the Washington Times-Herald. She lived in the brand-new Dorchester House apartment complex across from Meridian Hill Park. Kennedy moved into Apartment 542, but didn’t stay very long. He was transferred to Charleston, S.C., the following January and didn’t move back to D.C. until 1946, when he was elected to the House of Representatives.

After he was elected to Congress, Kennedy favored Georgetown, living in a number of houses and apartments in the neighborhood. However, in 1955, a few years after his election to the Senate and marriage to Jackie, he purchased the Hickory Hill estate in McLean. A year later, the couple decided to return to Georgetown. In early 1957, they moved into a rental house on P Street NW and lived there for one year — a year which saw the the birth of daughter Caroline and the Pulitzer Prize for “Profiles in Courage.”

When he lived in Georgetown, Kennedy regularly attended Mass at Holy Trinity Church, the oldest Catholic church in D.C., including on the morning of his inauguration. He is remembered on a plaque outside the church.

On May 1951, Kennedy’s friend Charles Bartlett, the bureau chief for the Chattanooga Times, and his wife, Martha, threw a dinner party at their home expressly for the purpose of setting up Kennedy with Jacqueline Bouvier. The initial meeting was not an instant success.

Bartlett later told the John F. Kennedy Presidential Library: “This was an awkward time actually because, as I said, she was going to Europe and he was just getting involved in the [Senate] campaign.” The friends persisted in the matchmaking and a little over two years later, they wed.

This was the Kennedy’s best-known residence and where they stayed until moving into the White House. The family moved into the three-story townhouse in January 1958. After winning the 1960 election, JFK would meet the press corps on the front steps of the house.

“Our next president doesn’t take the old, easy way of making his announcements about new cabinet ministers, the fate of the new frontier, etc., from his office on Capitol Hill — where, if one need edit, the corridors have steam heat,” complained Washington Post staff writer Thomas Wolfe in December 1960. “He just steps right out on the old front porch at 3307 N St. NW and starts talking. And disappears back into the manse.”

The house was sold in 1961. After Kennedy’s assassination, Jackie and the children moved back into the neighborhood, living at 3038 N St. NW and then at 3017 N St. NW. In 1964, tired of the unwanted attention from gawkers, they moved to New York.

In Booth 3 of this Georgetown tavern is a brass plaque marking the spot where supposedly “JFK proposed to Jackie” on June 24, 1953. However, this important moment is much disputed. Some sources claim the proposal took place at the Parker House restaurant in Boston, while others say it was done by telegram, when Jackie was in London covering Elizabeth II’s coronation for the Washington Times-Herald. The June 28, 1953, Boston Sunday Globe, reported that Kennedy had proposed the week before at the Bouviers’ home in Newport, R.I.

Booth 1 also remembers the president. The booth for one was where Kennedy would frequently eat breakfast and read the newspaper after attending Mass on Sundays.

Read more: Did JFK have a love child with an NY socialite?

One of only a handful of restaurants near the U.S. Capitol, it quickly became of favorite of senators, including Kennedy.

The evening before Kennedy’s inauguration Frank Sinatra and Peter Lawford organized a gala at the D.C. Armory, with performances by Sinatra, Ella Fitzgerald, Gene Kelly and Sidney Poitier. Sinatra arranged for the participants to stay at the Statler-Hilton, now the Capital Hilton, which was the site of one of the official inaugural balls. The next night, JFK made an appearance at the ball before slipping up to a private party organized by Sinatra.

Kennedy’s funeral Mass was held here on the morning of Nov. 25, 1963 by the archbishop of Boston, Richard Cardinal Cushing. A marble circle on the floor in front of the sanctuary marks the spot where his coffin was placed.