When did Ireland leave the British Empire? Spoiler - It wasn’t 1916

In reality, the Proclamation of 1916 had no legal effect. It would take a further three long decades before Ireland fully extricated herself. 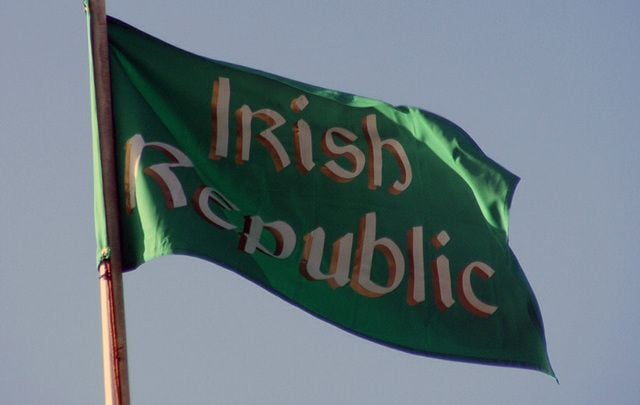 In reality, the Proclamation of 1916 had no legal effect. It would take a further three long decades before Ireland fully extricated herself.

In the popular mindset 1916 is the moment when Ireland threw off the chains of imperialism and left the British Empire.

But in reality, the Proclamation of 1916 had no legal effect. The rebels had no mandate legally - or even popularly - to sever Ireland’s constitutional bonds from Britain or her Empire. That would take time and a further three long decades would elapse before Ireland fully extricated herself.

Unlike America which proclaimed independence unilaterally, Irish independence came about through a negotiated settlement with the British Government in 1921. The Anglo-Irish Agreement controversially partitioned the island into two and even though the southern 26 counties would have its own Parliament, the new Free State would retain the King as its head of state.

For many this was an unacceptable derogation of Irish sovereignty. Members of the IRA had fought a war for a 32-county republic, not a partitioned island still firmly ensconced within the bosom of Empire as a British Dominion.

It was, Michael Collins acknowledged, an imperfect solution. But, he insisted, “it gives us freedom, not the ultimate freedom that all nations desire... but the freedom to achieve it.”

With weary resignation Ireland’s politicians took their seats in the new Free State Parliament - both only after they had fulfilled their legal obligation to swear an oath that they would bear “true faith and allegiance to the constitution of the Irish Free State, to the Treaty of Association, and to recognize the King of Great Britain as Head of Associated States.”

It was bridge too far for many; angry republican women waved sarcastic “Empire Day” placards at politicians as they arrived and many elected members simply refused to take their seats because of it.

But if the new Government - almost all of whom had been members of the IRA - were embarrassed by each other's’ professions of fealty to the British Monarch, they soon found his Empire had its uses; as Civil War spread across Ireland like wildfire the new Free State army found that it could only quell the anti-Treaty IRA with help from their former enemies in the British Army. Their former enemies were now indispensable allies and their former comrades in a revolutionary war their enemies.

Elsewhere the trappings of imperialism remained ubiquitous. The new Government saw to it that a bewigged and gowned Lord was enthroned as the speaker of Ireland’s new Senate and although the Union Jack mysteriously vanished from most Government buildings, stamps and coins continued to bear the portrait of King George V and Irish passports were issued in his regal name.

The National Anthem remained for a number of years the very Britannic ‘God Save the King’ and George V was represented by a Governor General. That there would be a representative of the Crown in Dublin was a red line issue for British negotiators and although various other titles were considered - including President of Ireland - Governor General was chosen because it was the same title used in other Dominions like New Zealand and Canada. If the British Government sought to exert too much control over the Governor General it was hoped the other Dominions would protest, thinking any interference in Ireland a threat of their own growing autonomy.

This was one of the most visible reminders of the British Empire. Constitutionally the Governor General was also the representative of the British Government and had to assent to any bills passed by the Free State legislature and in theory wielded a veto. He also fulfilled many of the duties of a head of state, holding garden parties in the summer and attending events held for worthy causes. He and his wife were generously housed and fed in the Viceregal Lodge. To visitors from anywhere in the British Empire the role would have been well understood and familiar. Many middle-class ladies in Dublin even curtsied when he passed by.

If the legal trapping of the new state still seemed shrouded in British imperialism, the new Cumann na nGaedhael Government - or His Majesty’s Government in the Irish Free State as it sometimes grandly referred to itself - set out loosening those legal bonds as quickly as possible. President of the Executive Council William Cosgrave keenly pressed for more autonomy at the 1926 Imperial Conferences. There, alongside his fellow Dominion Prime Ministers, it was agreed that Britain would renounce the legal power to legislate for any Dominion without its permission and abolished the British Government’s right to veto Irish laws. The Balfour Declaration was hailed as a triumph by many in Ireland as a significant stepping stone along the road to greater sovereignty.

By contrast many British imperialists fiercely denounced the Declaration and Churchill presciently warned the British Parliament, “this Bill confers upon the Irish Free State, full legal powers to abolish the Irish Treaty… It would be open to the Dáil… to repudiate the Oath of Allegiance.” Such an eventuality was exactly what many in Ireland hoped would happen.

And they would not have to wait long. In 1932 a new more stridently republican party called Fianna Fáil swept to power with a man called Éamon de Valera at its head. ‘Dev’ as he was widely known had rejected the Treaty on the grounds that he could not accept Ireland’s status as a British Dominion. Upon assuming power, he swiftly moved to abolish the hated Oath of Allegiance sparking a mini constitutional crisis in London. “TEST OF EMPIRE MEMBERSHIP” shouted the front page of the Times of London. David Lloyd George who had been Prime Minister during the First World War and negotiated the Anglo-Irish Treaty that Dev detested so much said the British Parliament was “practically unanimous on the... policy of treating the oath as the test of the Free State’s desire remain in the British Empire.”

Nevertheless, Britain blinked and Ireland went unpunished for so blithely casting aside a tenement of both the Empire and Treaty that had caused so much grief.

Emboldened, Dev moved next to abolish judicial appeals to the imperial Privy Council. No longer would Ireland’s highest court be in London but in Dublin. The result was more predictable gnashing of teeth and Lord Hailsham assured the House of Lords that no Dominion had the legal authority to sever its links to the Privy Council. But still, mindful of the need for good relations between the two states, the British Government “would do nothing to make future relations difficult.” John Dulanty, Ireland’s High Commissioner to London (equivalent to the position of Ambassador in the British Empire), assured a concerned King George that de Valera “does not want to break away from the Empire”.

The old King passed away in 1936 and the accession of his charismatic but flawed son Edward to the Throne presented de Valera with the greatest opportunity to refashion Ireland’s constitutional settlement since independence. Edward VIII, King by the Grace of God of Great Britain, Ireland and of the British Dominions beyond the Seas was a popular man. Handsome and charming, he was the Princess Diana of his day but his love for the twice divorced American Wallis Simpson would rattle the Throne of St Edward more violently than any crisis since William of Orange had toppled the Catholic King James.

Divorce was forbidden in Ireland but de Valera - unlike his Dominion colleagues - was relaxed about Mrs Simpson becoming Queen. Outmanoeuvred by his Prime Ministers and outflanked by furious Church leaders in England Edward VIII abdicated, leaving his Throne to his younger brother the Duke of York. Whilst the crisis convulsed much of the Empire, de Valera appeared supremely unbothered by the drama. Only when informed that unless the Oireachtas [Ireland’s two houses of parliament] passed legislation Edward VIII would remain King of Ireland did he act.

The same day that the Oireachtas formalized Edward VIII’s abdication, de Valera saw to it that a second bill was passed to “eliminate the King from all those Articles of the Constitution which seem to give him functions in our internal affairs.”

Twenty years on from 1916 was this the legal declaration of the republic proclaimed on the steps of the GPO? Not quite.

An actor recreates the scene of the reading of the Proclamation of Independence in 1916 outside the GPO.

The Oireachtas also passed an External Relations Act which stipulated that “so long as Saorstát Éireann [i.e. the Irish Free State] is associated with the [other member nations of the Commonwealth], and so long as the King is recognized by those nations… for the purpose of the diplomatic appointments and consular representatives… the King so recognized… may act on behalf of Saorstát Éireann.”

Was the Free State a republic or a monarchy many wondered?

De Valera’s new 1937 Constitution of Ireland declared the state a “sovereign, independent, democratic state” but not a republic. The new President of Ireland seemed to be the head of state but the new King George VI still signed international treaties of Ireland’s behalf and issued letters of credence to Irish diplomats just as his father had done before him.

Ireland remained a member of the Commonwealth but no longer went to Imperial Conferences. John Dulanty attended meetings for Commonwealth High Commissioners but admitted to feeling “like a whore at a Christening”. Ireland was, in Churchill’s words, “neither in nor out of the Empire.”

Emotionally the moment Ireland finally left the Empire for many was when de Valera declared he would not join the Allies in the fight against the Second World War. Before the US joined the conflict in 1941 the British Empire stood alone against the Nazis. Within hours of Britain declaring war on Germany in September 1939 so too did Australia, Canada, New Zealand and South Africa. For many British people it was bewildering that Ireland chose not to join them when so much was at stake.

The final, ultimate, rupture from the British Empire came in 1948. On a visit to Canada Taoiseach (Prime Minister) John Costello was affronted when a formal toast at dinner was made only to the King. Costello’s view was that the President of Ireland should have been included but the Canadian insisted that George VI was King of both Canada and Ireland so there was no need for separate toasts. The furious Taoiseach announced his Government would formally declare Ireland a republic and put an end to the final veneer of constitutional monarchy in the southern state.

The Republic of Ireland Act 1948 passed with cross party support, although Dev - then in opposition - said it would be better to wait until a 32-county republic could be proclaimed.

The Act came into effect on Easter Monday 1949. 33 years since the Easter Rising the state was now a fully-fledged legal republic and a member of neither the British Empire nor Commonwealth.