It is one of the most significant and beloved Irish songs ever written but “I’ll Take You Home Kathleen” is not of Irish origin. 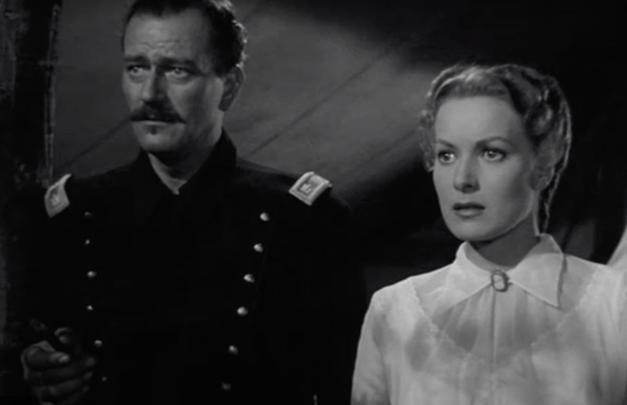 Written 11 years after the American Civil War and recorded by Bing Crosby, Elvis Presley, and Johnny Cash among many this beloved Irish ballad's history will surprise you.

Outside of “The Quiet Man” there are few more memorable scenes for Irish Americans in Hollywood movies than Maureen O’Hara being serenaded by a soldier singing “I’ll Take You Home Again Kathleen” in the 1950 movie “Rio Grande.”

Standing beside O’Hara is a handsome John Wayne in army regalia, listening intently as O’Hara, who played his separated wife, seems enthralled in the moment until the singer, Ken Curtis goes silent.

John Ford was directing a movie he didn’t want to make but his studio insisted as they felt his preferred film “The Quiet Man” would be a flop. The serenading scene was probably the highlight. As it turned out “The Quiet Man” was far more successful than expected.

Ask any Irish American today who is a lover of Irish ballads about “I’ll Take You Home Again Kathleen” and they will likely rank it as right up there with any Irish ballad in history, even “Danny Boy”, which ironically was written by an Englishman.

After all, Bing Crosby, Elvis Presley, and Johnny Cash have been among the great artists who have recorded “I’ll Take You Home Again Kathleen” since it was written in 1875, 11 years after the American Civil War in which Irish emigrants and Irish Americans had suffered deaths in great numbers.

“I’ll Take You Home Again Kathleen” with its poignant promise to bring a beloved wife home to Ireland “across the ocean wild and wide” was a perfect song for the times and has endured since.

But “I’ll Take You Home Again Kathleen” was not written by an Irishman, nor is the theme Irish exile.

According to the Library of Congress:

"In 1875 George W. Persley, a successful songwriter, wrote a song entitled 'Barney, Take Me Home Again' and dedicated it to his friend Thomas P. Westendorf (A German American).

"The words of 'Barney, Take Me Home Again,' sung by Barney's (unnamed) wife, tell of her longing to return to her home beyond the sea. Westendorf was taken enough by the song to write a song imagining Barney's response."

So was born "I'll Take You Home Again, Kathleen."

Westendorf was a beginner as a songwriter, while Persley was an old pro, but it was "Kathleen" which became the successful song. It inspired several answer songs during the period and is still well known today.

Indeed, if we can trust one episode of Star Trek, it will continue to be sung well into the future. It has featured as an Irish air on “Star Trek” in an episode, in 1966, where a strange substance makes crewman Thomas Riley believes he is a descendant of Irish kings and he sings the song repeatedly on the ship’s intercom

"Kathleen" launched Westendorf on a career as a successful songwriter, though he never produced another song with the poignancy and melodic charm of his first major song. "Barney, Take Me Home Again" and "I'll Take You Home Again, Kathleen" illustrate a problem with discussing ethnic typing in American songs of the 1870s.

There is no specific reference to Ireland in either of these songs nor is there a trace of Hiberno English in the lyrics. Yet "Barney" and "Kathleen" are both names used regularly for Irish characters, and the tradition of Irish singers longing for the homeland was strong. It is hard not to see the two songs as "Irish" songs, but the Irishness is downplayed: the songwriters portray Barney and Kathleen as people, not Irish stereotypes.’

Bit of a shock that!

You can see the clear linkages when you read the first few stanzas of “Barney Take Me Home Again:

Barney, dear, I'd give the world

To see my home across the sea

Where all the days were joy impearled

Before I went to roam with thee

I long beneath its roof to rest

Where never comes a care or pain

In all the earth it is the best

To where my heart will feel no pain

I'll go with thee across the sea