St Brendan is one of the most famous Irish saints, but whether he got to America before Christopher Columbus has remained one of the continuing Irish mysteries. 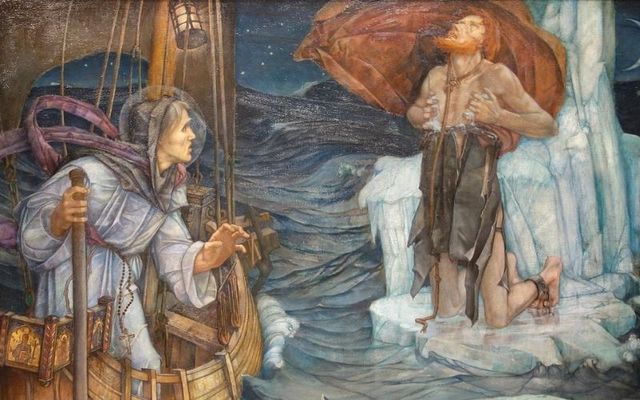 Artist's depiction of St Brendan: On the Kerry Saint's feast day we take a look at the explorer who followed in his steps to the USA. Public Domain

Today, May 16, is believed to have been the day of Saint Brendan's death and is also his feast day. St Brendan is one of the most famous Irish saints, but whether he got to America before Christopher Columbus has remained one of the continuing Irish mysteries.

Saint Brendan is one of the early Irish monastic saints. He is chiefly renowned for his legendary quest to the "Isle of the Blessed," also called Saint Brendan's Island. The venerated saint was one of the Twelve Apostles of Ireland.

The famous text, The Voyage of St. Brendan, is a work of fiction or fact depending on who is interpreting it. We know for certain that in 484, Saint Brendan was born near Tralee, in County Kerry.

What we also know for certain is that between the years 512 and 530, St Brendan built monastic forts around Ireland and then undertook a seven-year voyage which is the basis of the American legend. It is described as a hero’s journey in a boat and visits to an island far to the west which many modern historians believe is America. The island is called ‘Isle of the Blessed.’

Years later explorer Tim Severin retraced Brendan’s steps. Severin is a British explorer, historian, and writer who is noted for his work in retracing the legendary journeys of historical figures. Among his amazing journeys have been those of Marco Polo, Ulysses and that of Genghis Khan.

Some scholars believe that the Latin texts of Navigatio Sancti Brendani Abbatis (The Voyage of St. Brendan the Abbot), dating back to at least 800 AD, tell the story of Brendan's seven-year voyage across the Atlantic Ocean. Convinced that the legend was based on historical truth Severin built a replica of Brendan’s leather currach.

Between May 1976 and June 1977, Severin and his crew sailed the 4,500 miles (7,200 km) from Ireland to Peckford Island, Newfoundland, stopping at the Hebrides and Iceland en route. This was Brendan’s route.

Severin considered that his recreation of the voyage helped to identify the bases for many of the legendary elements of the story: the "Island of Sheep," the "Paradise of Birds," "pillars of crystal," "mountains that hurled rocks at voyagers," and the "Promised Land."

The British explorer’s book, "The Brendan Voyage," was published in 1978 and became an international bestseller, translated into 16 languages. Severin’s boat is now featured at the Craggaunowen open-air museum in County Clare.

However, despite this the debate remains ongoing it has been difficult for scholars to interpret what is factual and what is folklore. Was the Isle of the Blessed that Brendan reached America or just a historical fable?

The truth may never be known but it remains a constant claim by many that St Brendan got to America first before Columbus arrived on its shores in 1492.