The note appears to have been written by 12-year-old French schoolgirl Mathilde Lefebvre, who was traveling on the Titanic to New York City with her mother Marie. 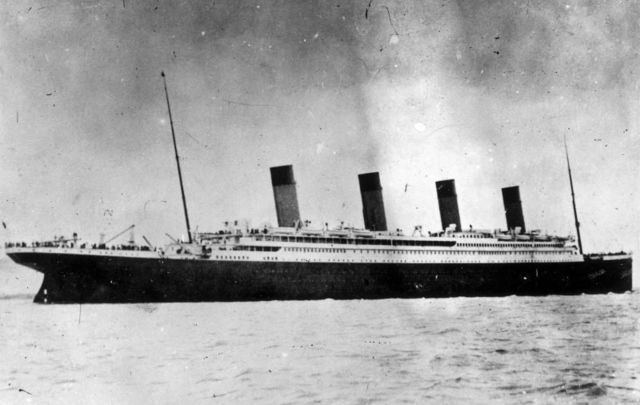 The Titanic sank on its maiden voyage in 1912 . Getty

Researchers are investigating the authenticity of a note in a bottle that appears to have been written by a French schoolgirl  drowned on the Titanic. The bottle washed up on a beach in Canada more than 100 years after the tragedy.

The note, which is dated April 13, 1912, appears to have been written by Mathilde Lefebvre, a 12-year-old French girl who was traveling on the Titanic to New York City with her mother Marie to visit her father and siblings.

Mathilde died with 1,500 others when the vessel struck an iceberg on April 14 and sank.

The still-sealed bottle was found in 2017 by a family walking along the shores of the Hopewell Rocks near Hopewell Cape, New Brunswick and handed over to the Universitee du Quebec in Rimouski.

The note, written in French, reads: “I am throwing this bottle into the sea in the middle of the Atlantic. We are due to arrive in New York in a few days. If anyone finds her, tell the Lefebvre family in Lievin.”

Academic researchers with the university are now attempting to authenticate the message. While the letter appears to be consistent with the period, they are still not sure whether the note is authentic or a hoax produced at the time of the sinking, The Daily Mail reports.

The message could be “the first Titanic artifact found on the American coast,” said history professor Maxime Gohier, who is leading the team of researchers.

“So far, we have not caught a smoking gun of a forgery,” he said in a statement.

Archaeologist Nicolas Beaudry said it is too early to conclude that the note was written by Mathilde.

Manon Savard, a professor of archeology and geography, told CTV News: "She's a famous passenger. She was featured in an exhibition in France in Cherbourg Museum, there was an exhibition on the children of the Titanic and she was mentioned there."

Radiocarbon dating has been done on the cork and the paper wrapped around it.

Dr Beaudry said: "The mould and tool marks on the bottle and the chemical composition of the glass are consistent with the technologies used in making this kind of bottle in the early 20th century."

"The cork stopper and a piece of paper stuffed in the bottle's bore yielded radiocarbon dates consistent with the date on the letter - we didn't date  the letter itself, since the method is destructive.

"So we haven't caught a prankster red-handed yet, but this still doesn't exclude a recent hoax.

"Old paper is easy to find - by ripping a blank page from an old book, for instance - while old bottles and even corks are not rare."

The researchers have noted that the handwriting on the note is inconsistent with what French schoolchildren learned at the time, but it is possible the letter could have been written for Mathilde by someone else.

The scientists are also attempting to determine whether a bottle thrown from the ship could have made its way to New Brunswick.

“A computer simulation showed that the overwhelming majority of drifters launched in the North Atlantic on April 13, 1912, would have followed the Gulf Stream to European shores,“ said Dr Beaudry.

“But a few individuals could have followed a different path to North American shores. Thus while it is not completely impossible, it remains very unlikely and further research will seek to quantify the probability.”

The team of researchers have now made the note public in an appeal for anyone with specialist knowledge to come forward and help prove or disprove its authenticity.

There have been three other messages in bottles found that appeared to be from the Titanic, but only one has been authenticated. That message was thrown overboard by 19-year-old Irishman Jeremiah Burke, a native of Cork. Burke’s bottle washed up a short distance from his home in Ireland just over a year after the sinking.

The other two bottles proved to be hoaxes.