"Safe Cycling," now streaming via the Irish Film Institute, was produced as a public safety film in 1949 with "tongue firmly in cheek." 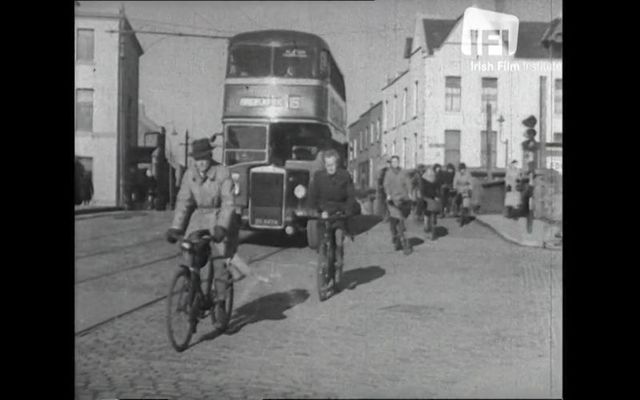 Cycling through a city can be a stressful experience. This public information film was produced in 1949 by the National Film Institute (now the IFI) for the Department of Local Government. The film made by filmmaker (later archivist) Liam Ó Laoghaire (aka O’Leary) advises on the best cycling practice around busy Dublin streets.

This public safety film from 1949 was shot with tongue firmly in cheek. While dangerous cycling habits are usually nothing to smile about, their re-enactment for the purposes of instruction and amusement can make for entertaining viewing.

The film shows the streets of 1940s Dublin filled with cyclists – some heavily burdened, some devil-may-care, some attentive to the rules of the road, some not at all – and provides an unusual saddle-level view of a wide range of north and south city locations. From the history of the bicycle to basic road safety procedures this film can still teach even the most proficient cyclist of today a thing or two.

"Safe Cycling" is published here with the kind permission of Paul Hannon, The Department of Transport, Tourism, and Sport and with thanks to the Irish Film Institute (IFI), who IrishCentral has partnered up with throughout 2022 to bring you a taste of what their remarkable collection entails. You can find all IrishCentral articles and videos from the IFI here.