In the Oscar-nominated "Give Up Yer Aul Sins," now available to stream on the Irish Film Institute, a Dublin schoolgirl recounts, in her own words, the story of John the Baptist. 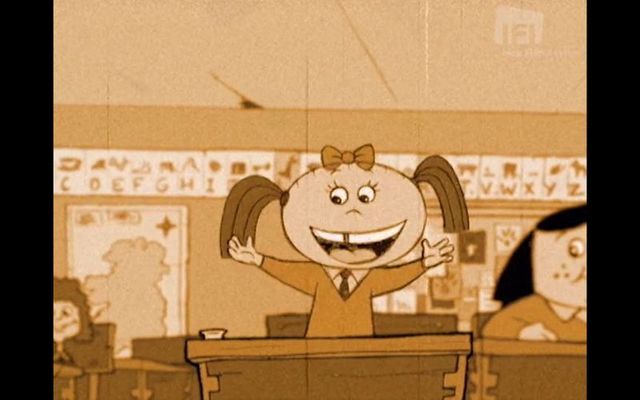 "Give Up Yer Aul Sins," now available to stream on the Irish Film Institute's IFI Archive Player, humorously animates original audio recordings of Dublin schoolchildren made by their teacher Peg Cunningham in the 1960s.

In the short film, a documentary crew arrives to record the activities of the classroom. The teacher chooses little Mary to retell, in her own imaginative way, the bible story of John the Baptist.

30 years earlier, the boys and girls of children of Rutland Street National School were filmed by Father Jack Delaney. They can be seen in the short, silent amateur film "Gloucester Street."

"Give Up Yer Aul Sins," a part of the Irish Film Insitute's Oscar® Collection: A Selection of Irish Academy Award® Nominated Short Films, was nominated for the Academy Award® for Best Short Film (Animated) in 2002.

This film, also a part of the IFI's new Children on Film, is recommended for viewers 6 and up.

This substantial new collection of films from the Irish Film Institute provides a vibrant overview of childhood in Ireland from the 1930s to more recent times.

While some of the films have been made by children themselves, most are made about them by adults keen to capture their uncorrupted perspectives as they navigate the world around them. The collection rewards close study as it offers insights into changing expectations of children; their role in family life and their experiences in Irish society over 80 years.

"Give Up Yer Aul Sins" is published here with kind permission of Brown Bag Films and thanks to the Irish Film Institute (IFI), who IrishCentral has partnered up with throughout 2022 to bring you a taste of what their remarkable collection entails. You can find all IrishCentral articles and videos from the IFI here.