On This Day: Roy Keane sent home from 2002 World Cup

Former Republic of Ireland soccer manager Mick McCarthy's decision to send his captain and talisman Roy Keane home from the 2002 FIFA World Cup in South Korea and Japan sent shockwaves through Irish sport on this day 20 years ago. 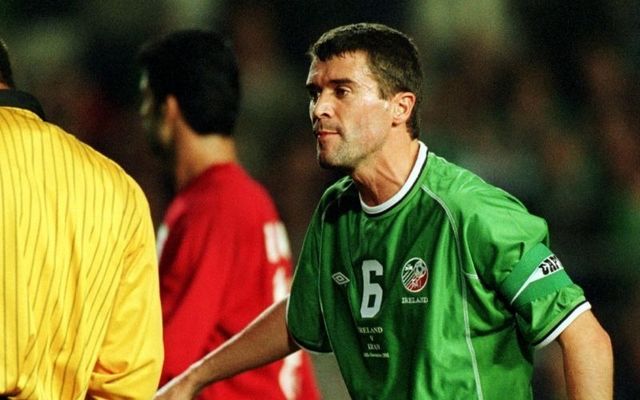 Roy Keane of Ireland during the World Cup Qualifying Play-Off, 1st Leg between the Republic of Ireland and Iran at Lansdowne Road, Dublin. Getty

It was an issue that divided modern-day Ireland like no other, turning friends and family members against each other in the equivalent of a sporting civil war.

Former Republic of Ireland soccer manager Mick McCarthy's decision to send his captain and talisman Roy Keane home from the 2002 FIFA World Cup in South Korea and Japan sent shockwaves through Irish sport on this day 20 years ago.

Tensions between Keane and McCarthy had been bubbling under the surface for quite some time, but they reached a fever pitch when the Irish team arrived on the Pacific island of Saipan for a training camp in May 2002.

Keane quickly became dissatisfied with the standard of facilities at the training camp and the general preparations of the Irish management.

The 30-year-old Manchester United midfielder, who was instrumental in securing Ireland's place at the 2002 World Cup, announced his departure from the Ireland squad on May 22 before changing his mind at the 11th-hour and remaining in Saipan.

It would be a brief respite, however,

McCarthy sent Keane home the following day after the Ireland captain gave an interview with the Irish Times voicing a number of concerns he had about preparations for the World Cup.

The controversial interview prompted McCarthy to call a team meeting, during which Keane allegedly launched into an abusive and expletive-filled tirade against his manager.

McCarthy announced that he had sent Keane home shortly after the argument, virtually causing a schism in Irish society.

Battle lines were drawn, with Irish Manchester United fans largely backing their club legend and most others backing McCarthy and the Irish squad.

Talk shows, newspaper columns, and news broadcasts were dominated by the incident, while bitter arguments between family members and close friends became commonplace.

Everyone from the Football Association of Ireland to Taoiseach Bertie Ahern got involved in the affair, attempting to force a last-minute reconciliation between Keane and McCarthy before the Irish squad jetted off to Japan for their first World Cup game against Cameroon on June 1. The efforts ultimately proved unsuccessful and Ireland went through the World Cup without their best player.

The Boys in Green performed admirably in the World Cup, exiting the competition in the round-of-16 after a heartbreaking penalty shootout against Spain.

Who knows what they could have achieved with their captain and talisman at the heart of their midfield.