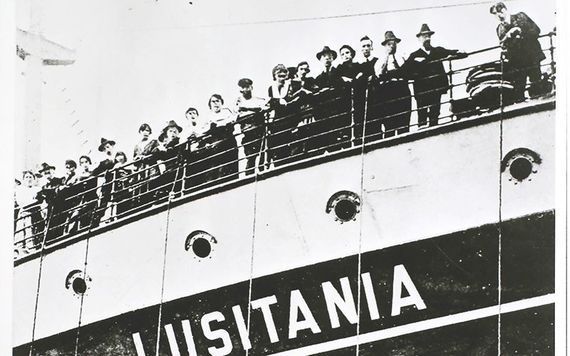 The book, “Warships, U-Boats & Liners - A Guide to Shipwrecks Mapped in Irish Waters”, includes details on the background of the vessels alongside the photograph and sonar images.

Following a 12-year survey of the offshore waters and coastal seas around Ireland carried out by Geological Survey of Ireland (GSI) and the Marine Institute, the Irish government launched an illustrated book entitled “Warships, U-Boats & Liners - A Guide to Shipwrecks Mapped in Irish Waters.”

The coffee table book features stunning shots of wrecks on the seabed including the Lusitania off the Cork coast and US army tanks on the seabed 17 miles off of Donegal. Many of the 300 shipwrecks featured in the book were not known about before this survey.

The book includes details on the background of the vessels alongside the photograph and sonar images.

The publication was launched in 2012 by then the Minister for Arts, Heritage and the Gaeltacht, Jimmy Deenihan TD, together with Fergus O'Dowd TD, who was at the time a Minister of State in the Department of Communications, Energy and Natural Resources.

The book is the result of the collaboration between the Geological Survey of Ireland (GSI), the Marine Institute and the Department of Arts, Heritage and the Gaeltacht's Underwater Archaeology Unit (UAU), part of the National Monuments Service.

According to Minister O'Dowd, the collaboration has "truly made Ireland a leader in this field of endeavor."

During the same 12 years, the UAU has built an extensive database of shipwrecks, Afloat Magazine reported.

Minister Deenihan said, “The current database holds over 13,000 wrecks and is an essential management tool for the preservation, protection, and promotion of Ireland's rich maritime archaeological heritage."#

O'Dowd then commented, "as an island nation we instinctively know that our seas are important, but perhaps we are not fully aware of the scale of this natural resource and heritage they hold."

He added that "over 80% of our national territory lies beneath our seas, and that many of the benefits that might be realized for the country from this resource are as yet undiscovered."

The ministers congratulated the authors, Karl Brady (UAU), Charise McKeon (GSI), James Lyttleton (UCC) and Ian Lawlor (BIM) for this publication and highlighted the book as an excellent example of two different government departments working together in partnership, bringing together expertise in archaeology and marine mapping to highlight Ireland's leading role in seabed mapping and protection, as well as promotion of marine cultural heritage.