The 98-page dossier dates back to before the 1960 presidential election. 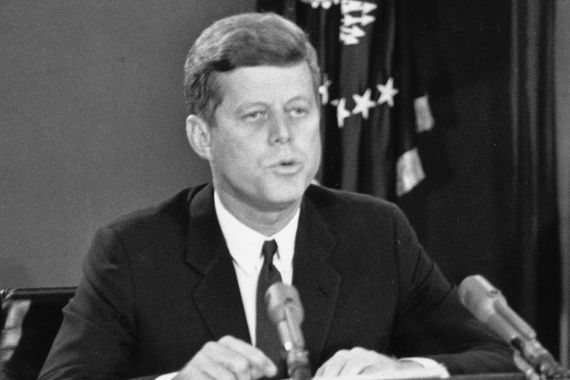 John F. Kennedy's private notes revealing his thoughts on adultery have been sold for $25,000 at an auction on April 22.

The 98-page dossier dates back to before the 1960 presidential election and documents Kennedy's fear about his extra-marital affairs being exposed to the public.

The former president told of his soft spot for blonde women and his worries that the affairs were going to be used to derail his presidential campaign in the priceless notes.

"I got into the blondes," Kennedy wrote.

"I suppose they are going to hit me with something before we are finished," Kennedy wrote in the notes.

"If I win, my poon (old-fashioned navy term for sex) days are over," Kennedy wrote.

The majority of notes date back to April or May 1960 when Kennedy was on the campaign trail during the Democratic primaries. He had contracted laryngitis and doctors ordered him not to talk, meaning that he had to communicate with his aides.

His comments on adultery are thought to date back to October 1960, just before the presidential election against Richard Nixon.

The priceless collection of notes was owned by a private collector until recently before they were auctioned by Heritage Auctions of Dallas, Texas.

Kennedy hurriedly scribbled the notes on yellow legal pads in an informal style and often jumped quickly between topics, ranging from his extra-marital affairs to his thoughts on his political opponents in the primaries.

He rarely used punctuation, making the notes difficult to read.

The notes also give a priceless insight into his presidential campaign and show that Kennedy considered the racial issue to be one of the key issues in the campaign.

"Should I bring in the racial issue," he mused at one point.

"I had planned to speak about Civil Rights earlier in the day," he said on a different page.

A fantastic group of seventy-eight separate pages, twenty of which are written on both sides, for a total of ninety-eight pages of notes, questions, and comments in Kennedy's hand, circa Spring 1960.

Kennedy often took crude notes about his Democratic rivals and abrasive journalists and his notes about fellow Democratic candidate Herbert Humphrey give a particularly interesting view into political debates and how politicians abroach them.

The future president expected a rebuke from Humphrey on a nameless issue and planned on urging the public not to nominate him for the presidency. However, Kennedy seemed reluctant to publicly challenge Humphrey's electability and seemed keen to stay away from the subject.

"HH is going to be bitter on us and we should be ready," Kennedy said of his rival. "We should not say he can't win. We should say he can't be nominated.

"Perhaps we shouldn't have this before a live audience... HH is pretty good with a crowd and with my voice off we would be better in a studio."

Kennedy used some colorful language when talking about nationally syndicated journalist Doris Fleeson, whose column ran in about 100 newspapers in 1960.