The presence of the Pict DNA in Northern Ireland may be due to the Scottish plantation in the 16th and 17th centuries. 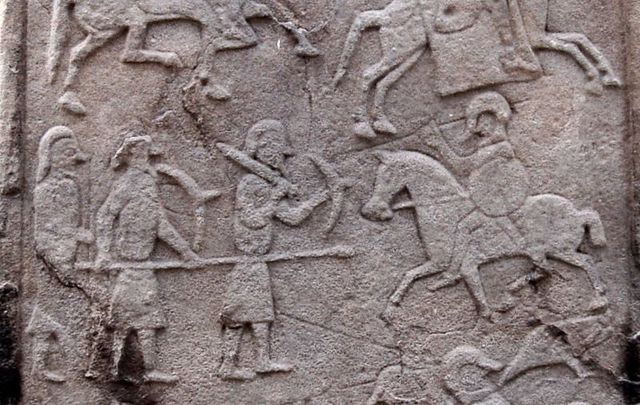 The Pictish stone in the churchyard at Aberlemno Parish Church (the stone is sometimes known as Aberlemno II). The battle scene depicted is generally accepted to be that of the Battle of Nechtansmere. Public Domain

ScotlandDNA, an ancestry testing company, discovered a DNA marker that strongly suggests that ten percent of Scotsmen are directly descended from the Picts, the Gaels’ fierce neighbors who battled the Romans.

The company’s chief scientist, Dr. Jim Wilson, found a Y chromosome marker among direct descendants of the Picts in 2013. The Scotsman.com reported he said this marker is the “first evidence that the heirs of the Picts are living among us.” The marker is labeled R1b-S530.

ScotlandDNA’s managing director Alistair Moffat said about the discovery, “These findings were probably one of the biggest surprises we’ve had in our research. The Picts seem kind of exotic, and different and quite colorful and so I was personally, really, really rather taken with this.”

Dr. Wilson tested this marker in more than 3,000 British and Irish men and he found it was 10 times more common in those with Scottish grandfathers than with English grandfathers. 170 Scottish men have been found to carry this marker, though the real number is likely higher. More than 10 percent of 100 Scotsmen tested carried R1b-S530. He said, “As you go up your family tree, there are all sorts of paths. But if we can see that about 10 percent of father-lines look to have a Pictish origin, then we can make the prediction that probably a lot of other lines do too.”

Only 0.8 of English men carry this marker and about 3 percent of men in Northern Ireland carry it. The presence in Northern Ireland may be due to the Scottish plantation in the 16 and 17 centuries. Only 1 of 200 men carried the marker in the Republic of Ireland.

Dr. Wilson commented on these differences, “The finding just popped out of the analysis. While there have been hints of this from previous data, what was surprising was the really huge difference between Scotland and England.”

Dr. Wilson is also a senior lecturer in population and disease genetics at the University of Edinburgh. He said, “It is a clear sign that while people do move around there remains a core who have remained at home. Perhaps this was due to farming or that moving around would have to be done on foot.”

The Picts were a group of tribes living in the Forth and Clyde beyond the reach of the Romans. They lived near the Britons, Gaels, Angeles, and the Vikings. The Romans called them the “Picti” which means “the painted ones.” They were first mentioned by a Roman chronicler in 300 AD. They fought with the Romans and the Angles and the Picts had overrun the northern frontier of the Roman empire on several occasions by the late 200’s. Previously thought to have “disappeared,” scholars now believe they became assimilated by invading Scots from Ireland.