Archaeologist claims that the trapped sunlight phenomenon at Newgrange might be from some tinkering 50 years ago. 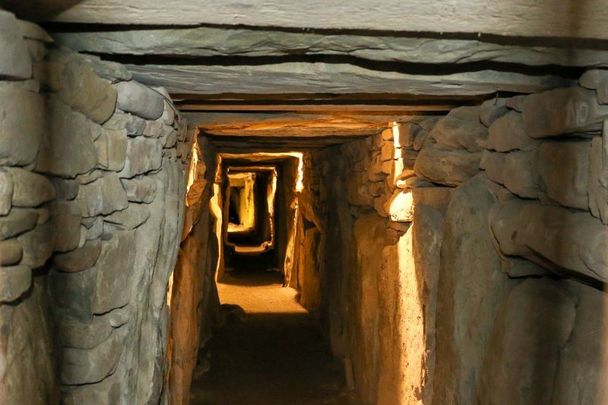 Archaeologist claims that the trapped sunlight phenomenon at Newgrange might be from some tinkering 50 years ago. Getty Images

A prominent Irish archaeologist posited in 2016 that the roof box on the passage tomb is not a 5,000-year-old relic but a 50-year-old “construct”

The winter solstice light show at Newgrange is one of the most stunning visual phenomena in all of Ireland, so popular that there’s a lottery every year just to get the chance to see it. It's such a wonder that during Covid lockdowns the phenomenon was streamed online so the entire country could enjoy it.

At sunrise on the days surrounding the winter solstice, a “roof box” at the top of the entrance to the main megalithic tomb aligns with the sun, allowing light to slowly fill the passage tomb for a glorious 17 minutes.

The phenomenon has long been considered an ancient way of marking the start of another year, however, Michael Gibbons, a prominent Irish archaeologist, argued in 2016 that the roof box is not a 5,000-year-old relic, but likely a 50-year-old “construct.”

Gibbons, who knows the Newgrange site well (he is a past co-director of the Office of Public Works' (OPW) national sites and monuments record office, the Irish Times reported), co-authored a paper in the journal Emania with his nephew, Myles.

They claim that the roof box was not originally part of Newgrange, but was added during the excavation in the 1960s.

The excavation and restoration were led by Professor Michael O’Kelly, who did make a number of now-questionable interpretations, including the addition of the quartz wall that surrounds the passage tomb.

Gibbons and his nephew argue that O’Kelly’s claim that Newgrange sat mostly unchanged and untouched since the Neolithic age is inaccurate, with the site showing many signs of Iron Age changes. He told the Irish Times that the roof box holds “not a shred of authenticity” and was “fabricated” during reconstruction in the 1960s.

Asked to comment, Dr. Richard Hensey, author of “First Light: The Origins of Newgrange,” said that Gibbons was correct in that Newgrange shows signs of “significant Iron Age activity,” but he was “not correct” about the roof box being a modern construct. He claims there is evidence that it is indeed 5,000 years old, but that it was elevated during the restoration process.

“Prof O’Kelly worked at a different time when the criteria and guidelines we have for reconstruction did not exist,” he told the Irish Times.

Do you think there’s a chance that Newgrange’s roof box is only 50 years old? Would that change the way you consider the ancient monument? Share your thoughts in the comment section.