The 12-bedroom mansion located at 726 W Garfield Blvd. was reportedly built for Mrs. Catherine O'Leary by her son James O'Leary after the Great Chicago Fire, which broke out on this day in 1871 at O'Leary's farm. 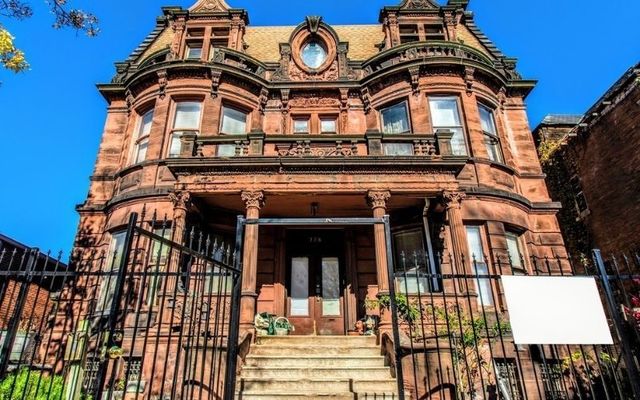 A house allegedly owned by the famous Mrs. O'Leary of the Great Chicago Fire legend is up for sale for $473,000.

The 12-bedroom mansion located at 726 W Garfield Blvd. was reportedly built for Mrs. Catherine O'Leary by her son James O'Leary after the Great Chicago Fire, which broke out on this day in 1871 at O'Leary's farm.

Mrs. O'Leary's cow Daisy was falsely accused of starting the fire by kicking over a lantern mid-milking, but her connection to the disastrous blaze has remained intact despite her exoneration by the Chicago City Council in 1997.

Redfin - the real estate firm listing the property - says that it receives more than 50 calls per week related to the property with people eager to learn if the house really belonged to the famous Mrs. O'Leary.

The real estate firm claims that James O'Leary built the house for his mother in 1890, although the rumor is impossible to prove with any certainty.

Chicago Fire experts state that Mrs. O'Leary's connection to the home is dubious, with some experts pointing to an obituary that stated that O'Leary died at a house on nearby South Halsted Street.

Others pointed to census records, which showed that James O'Leary did not move into the mansion at 726 W Garfield Blvd until after his mother's death in 1895.

Carl Smith, who authored an extensive book on the Great Chicago Fire, told the New York Times that it was almost impossible that James O'Leary would have been able to afford the mansion on West Garfield Boulevard in 1890 when he would have been just 21 or 22.

"I can’t rule it out, but nothing points to it," Smith told the New York Times. "And I don’t think you nor I are ready to trust real estate agents as historians."

Whether the house belonged to Mrs. O'Leary or not, it remains an interesting property, boasting 12 bedrooms, five and a half bathrooms, and four stories.

Redfin admits that the mansion requires some "TLC" but states that its value could rocket to well over $1 million with the right work.