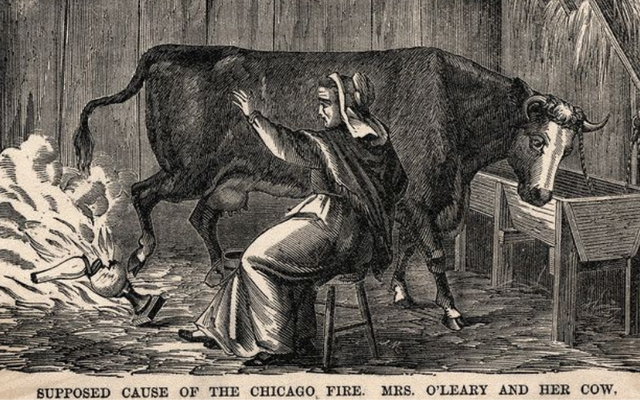 A DNA test kit revealed to a Chicago woman that she is a distant relative of Catherine O'Leary, an Irishwoman who was blamed for starting the Great Chicago Fire.

According to the Chicago Tribune, results from a DNA test done by Chicago local Cindy O’Gara, have shown that her biological father was the great-grandson of Catherine O’Leary’s eldest child, Mary O’Leary Scully.

O'Gara eventually connected with her birth father’s two sisters, who recalled family stories they’d grown up with and the 150-year-old tale that has haunted several generations of the O’Learys, making their name synonymous with the city’s destruction.

Their family story goes back to the 1800s when Patrick O’Leary from County Kerry, Ireland married Catherine Donegan from County Cork.

After the birth of their first child, the family immigrated to America and Patrick enlisted in the Civil War. Soon after the war ended, the O’Learys arrived in Chicago, where the couple’s last three children were born.

There are several versions of the legend of the Great Fire, but the most common one is that on October 8, 1871, Catherine O’Leary went into a barn on a dry night with a lantern to milk one of her cows for oyster stew. O’Leary left the lantern in the barn and the cow kicked it over and started the fire.

Chicago at that time was still a new city. Founded a mere 30 years before it was believed to be the fastest-growing city in the entire world. Most of it had been constructed in haste - and poorly at that - almost everything was made of wood and tightly packed together. Tragically the aftermath of the two-day blaze left 300 dead and 100,000 homeless.

The O'Leary family of the time long maintained that they were in bed that evening when the fire started. The cause of the fire still remains a mystery, with many agreeing now that a poor Irish emigrant was the perfect scapegoat. Catherine O'Leary was vilified for the rest of her life and would eventually die "heartbroken".

The fire remained a taboo subject within the O'Leary family for generations and the shame of the incident was passed down.

“People would come from all over to throw rocks at the house,” explained Peggy Knight, a great-great-granddaughter of Catherine and Patrick O’Leary.

Now approaching the anniversary year of the family’s biggest tragedy, descendants say they’re embracing their Irish heritage and want to finally put an end to the old rumor.

"Kate and Patrick O’Leary were these strong people. It’s hard to get out of Ireland during the Potato Famine, and then the shame heaped upon us,” Knight said

“I think it’s time for closure...I wish she would have [spoken to reporters], but there was no option. There was no social media. All that was written [on the incident] is what was written in the newspapers and it wasn’t the gospel truth.”

Reflecting on the discovery of her family and her connection to the O'Leary name, Cindy O'Gara said,

“Obviously growing up in Chicago, I was very familiar with the story, but I always kept a distance from it,” she said. “But not now, because now I know. It’s my blood. I know who I am now. I’m an O’Leary.”