Molly Malone Day - What's the truth behind the iconic Dubliner?

June 13 was declared as Molly Malone Day 1988. She is memorialized in a statue in Dublin's City Center, but how much do we really know about Molly Malone? 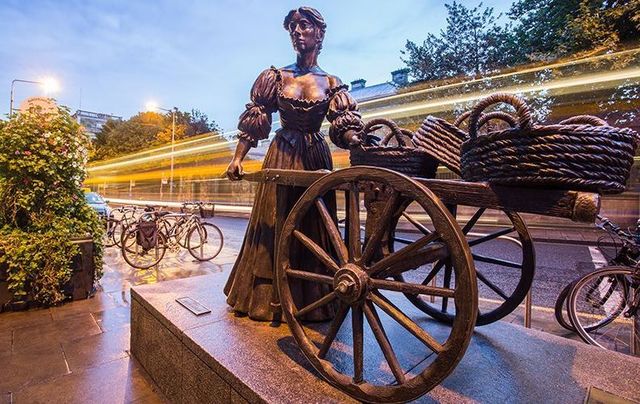 Most people will know the Irish song "Molly Malone," but how much do you know about the song, and the woman who supposedly inspired it?

"She died of a fever, and no one could save her, And that was the end of sweet Molly Malone"... The original Molly Malone may not have been a sweet-hearted Dublin girl selling her cockles and mussels from a wheelbarrow after all.

Molly Malone is one of Ireland’s most famous songs, belted out in pubs worldwide, though ironically attributed to an American, James Yorkston who is said to have written it in 1883.

The chorus line "Cockles and mussels alive alive o” is probably one of the most widely sung Irish ballad lines ever.

But another version of the song has was located back in 2017. It is a much more bawdy and risque song suggesting the original Molly may have been selling more than her seafood from her wheelbarrow.

A tiny 18th-century book has turned up at a literary festival in England that predates the song about 100 years before the official version.

Molly doesn't have a wheelbarrow in this version but her admirer has clear designs on her in the version printed today in the London Guardian newspaper.

It ends: "Och! I'll roar and I'll groan, My sweet Molly Malone, Till I'm bone of your bone, And asleep in your bed."

The song says the original Molly lived by "by the big hill of Howth", which has been a fishing village since Viking times.

The famous cockles and mussels version was first published in the United States in 1883 and was attributed to James Yorkston. But the older version has quite different lyrics.

Other versions mentioning the hill of Howth are known, but none earlier than the early 19th century.

The new version contained in a book called Apollo's Medley, printed in Doncaster, says that it contains "the most popular and admired songs sung at the Theatre Royal and other public places of amusement".

The singer worries that Molly may be lonely in her solitary bed: "Be poison, my drink, If I sleep, snore, or wink, Once forgetting to think, Of your lying alone."

And his devotion is clearly beyond question:

A statue of Molly Malone crafted by sculptor Jeanne Rynhart was installed at the bottom of Grafton Street (though later moved to Suffolk Street) to celebrate Dublin's millennium in 1988. Dublin wits soon christened it ‘The Tart with the Cart.’  The new version claims that name may be apt.

Frank Magee, chief executive of Dublin Tourism, stated this earlier song could be the source of long-time speculation that Molly supplied shellfish by day and special services at night.

"Everyone knows that it is hard to believe that such activities if they took place in Dublin in the late 17th century, were of a mercenary nature. The author admits to having imbibed drink, which is another unusual characteristic for a Dubliner, and so I believe his recollection of his night with Molly may have been clouded by alcohol.

"I believe that there is no evidence to suggest that Molly was anything other than a lady of virtue, who was smitten by the writer and may have shared her bed with him," he told The Guardian.

Here is a beautiful rendition of "Molly Malone" by Sinead O'Connor: