The first assassination carried out by Michael Collins's 'Squad'

On July 30, 1919, four men - known as Michael Collins's 'Squad' - carried out the assassination of Detective Patrick 'The Dog' Smith in Dublin. 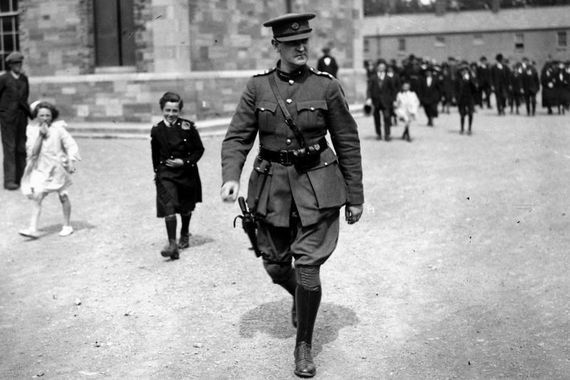 Michael Collins's so-called 'Squad' carried out their first hit on a Dublin Castle detective on July 30, 1919, in Dublin.

50-year-old Detective Sergeant Patrick 'the Dog' Smith from Cavan was a thorn in the side of the Republican movement. As a member of the notorious Dublin Castle G Division, he doggedly hunted down Republicans and at every opportunity disrupted their operations. He had been warned many times to cease his activities by Collins but he ignored the warnings. When Smith arrested Piaras Beaslai, a close friend of Collins and a head figure within the Republican movement, he found incriminating documents on his person. Collins warned Smith not to produce the documents in court but, of course, the Dublin Castle G Man ignored Collins and his fate was sealed.

A four-man team consisting of Tom Ennis, Mick Kennedy, Tom Keogh, and Jim Slattery were tasked with taking out the hit on 'The Dog' Smith. After watching Smith's every movement, it was decided to shoot him as he made his way home from work and on the evening of July 30th the plan played out.

Smith got off a tram at Drumcondra Bridge when four men brandishing revolvers appeared and unloaded their contents in his direction. With four bullets lodged in his body, Smith somehow kept himself upright and managed to run to his home at Millmount Avenue.

Smith opened the front door and fell into the hallway. As his teenage son dragged him away from the doorway another of his sons, a six-year-old, ran out onto the street in pursuit of the assassins but, they were long gone.

Smith would linger for five weeks in the Mater Hospital before succumbing to the work of The Squad. Collins, however, was angered with the assassination, worrying that Smith would recognize the gunmen. Fortunately for them, he didn't.

Collins did not blame the four hitmen for Smith's short-lived survival, he blamed the arms they carried. The .38 revolvers were deemed too inadequate for a job such as a quick assassination and from then on The Squad upgraded their weapons of choice to .45s.

In the aftermath of the Smith shooting the British authorities raided the Sinn Fein office on Harcourt Street, along with other premises across Dublin associated with the Republican movement but they failed to capture those involved in Smith's assassination.

The Squad would go on to become a well-oiled assassinating machine with newer members with newer improved arms. On a salary of £4.10 a week, The Squad members had the sole job of cutting the line of information going into Dublin Castle through G division.

The Squad, which would often be referred to as the 12 Apostles, carried out the bloodletting aspect of the intelligence war which would eventually eradicate the Dublin Castle G Division and ultimately bring the British government to the negotiating table.