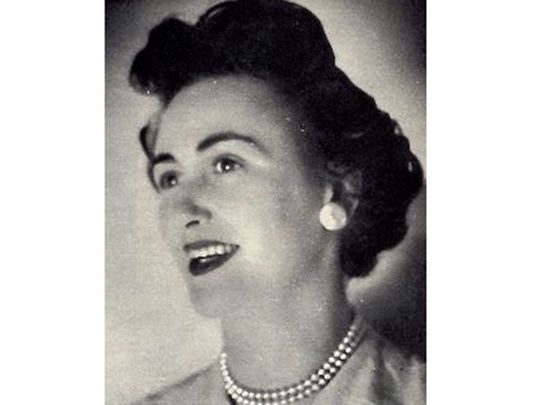 Sybil Connolly, who designed the dress worn by First Lady Jackie Kennedy in her White House portrait, took the comforts of Irish country fashions and showed them to the world, becoming a highly influential figure in the fashion industry for over five decades with thanks to her creative adaptations of Irish traditional clothing styles.

Connolly, who was born in Wales in 1921 to an Irish father and a half-Welsh, half-English mother, moved to Ireland as a teenager before her fashion career kicked off with a move to London in 1938 while still in her teens.

The granddaughter of a country squire and scholar, she worked as an apprentice at prestigious dressmaking establishment Bradley’s, even holding pins for the Dowager Queen Mary's dress fittings in Buckingham Palace.

Returning to Dublin in 1940, Connelly worked as a buyer in a specialty shop, quickly replacing the original designer when they emigrated to the US and it was here that she was discovered by a group of matrons from the Philadelphia Fashion Group in 1952 while they spent some time Dublin.

From here her star began to rise as the Dublin-based designer became more recognized for creating haute couture from Irish textiles such as Carrickmacross lace and handwoven Irish Donegal tweeds.

With her use of tweed, crochet, vibrantly colored lace and interesting silhouettes, the Irish designer attracted the attention of Harper's Bazaar editor Carmel Snow, who would prove instrumental in her career, flying over press and buyers to view Connolly’s collection.

Bringing her collection to New York first in 1953, one of Connolly’s dress designs appeared on the cover of Life magazine captioned “Irish Invade Fashion World” and it was clear she had made it.

Connelly championed soft and casual clothes at a time when the Parisian designers were strictly producing rigid, constructed designs. For the Irish designer, however, the Irish traditions allowed her to create clothes that had life and suited the movement of the body.

“I must see movement in a dress,” she once said. “A woman’s body is inside. It breathes. It moves.”

Read more: The first Irish woman to have the fashion world at her feet: Sybil Connolly

Connolly became known as the first woman to have the fashion world at her feet, successfully targeting the American market and changing the way that sophisticated women dressed with her innovative designs.

Her own couture fashion line launched in 1957 when she was still just 36 years old and she moved into a new building at 71 Merrion Square. Describing her headquarters in Dublin as “a shop window for Ireland”, she employed 100 women who wove tweed and crocheted lace from their home.

Connelly was an integral part of reviving the old Irish crafts, a revival that is still feeling her influence today. She took inspiration from the way that Irish country women dressed and the comfort they had in their clothes while they carried out their daily routine on farms and in cottages, reworking them to suit urban and international tastes.

Such inspiration included the reworking of a hooded cloth worn in Kinsale, Co. Cork, as a velvet cape, and the unbleached wool yarn used in Aran sweaters being reimagined in unusual sports outfits.

Ireland was not always happy with their traditional designs being interpreted in this way, however, and although Connelly always sought to keep her prices lower than other European labels, some people were not taken with what they felt was the exploitation of the nation’s peasantry.

An active designer until her death, Connelly included Jackie Kennedy, Julie Andrews, Elizabeth Taylor, and the Rockefellers among those who wore her designs, even designing modern habits for three orders of Catholic nuns in Ireland. The designer was, in fact, highly religious and a priest had to bless each collection before its presentation.

It was her pleated linen for which she was most famous, however, and it was in one of these dresses that one of the world’s greatest style icons, Jackie Kennedy, appeared in her White House portrait. The incredible technique involved closely pleating up to nine yards of linen handkerchiefs to produce one yard of delicate fabric.

Following the decades-long success, Connelly faltered slightly in her later years refusing to accept that good fashion had to change and denying the growing trend of the miniskirt. She stayed true to the advice she had received from Christian Dior that a “ woman should show her curves, not her joints” and also refused to embrace the changes in fashion that saw women now wearing trousers!

Sybil Connolly died at her home on Dublin’s prestigious Merrion Square on May 6, 1998.