After shamrocks and harps, thatched cottages might just be one of the most iconic symbols of Ireland.

With less than 1,500 thatched cottages left on the whole island, these dwellings are more precious than ever.

The materials used in construction varied across the years, from region to region, and depending upon the wealth of the family. For the walls, lime mortar was the most desirable – but also the most expensive – material. Mud tempered with strengthening agents such as straw, reeds, or animal matter was a popular alternative.

For the iconic roofs, overlapping layers of sod were placed on the timbers. On top of this went the straw thatch, derived from a variety of materials such as wheat and flax, carefully cut and threaded by a thatcher in either the slice or sketch style. It would often take as many as 5,000 handfuls of straw to complete a roof.

A thatched cottage in County Kerry.

The trade of thatching was passed down through the generations, from father to son. The work was fairly steady since thatching must be replaced anywhere from every five to twenty years depending on the material and its condition.

Today, with the general decline in popularity of thatched cottages, thatching has become rare as a family trade, but a number of groups and individuals dedicated to the craftwork throughout Ireland to restore existing cottages and build new ones. 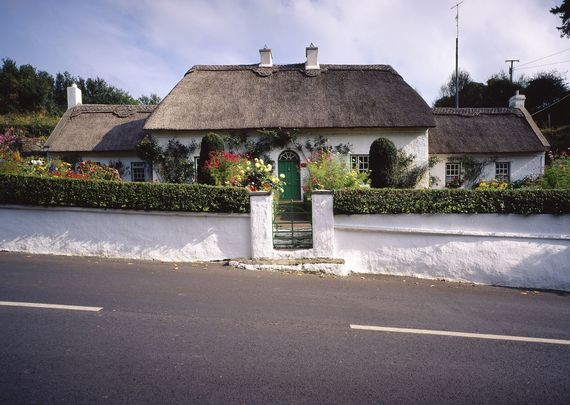 As closely associated as thatching is with Ireland, it was also widely practiced in a range of other countries. Examples of thatched roofs can be found In Japan, Peru, Germany, Bali, and Denmark, to name just a few.

Scroll on to see some fine examples of Ireland’s thatched cottages, and to read Seamus Heaney’s ode to the art, “Thatcher.”

It seemed he spent the morning warming up,