The special love-hate relationship between Irish and Italian Americans

Without a doubt, the Irish and Italians have had an... interesting past in the US. 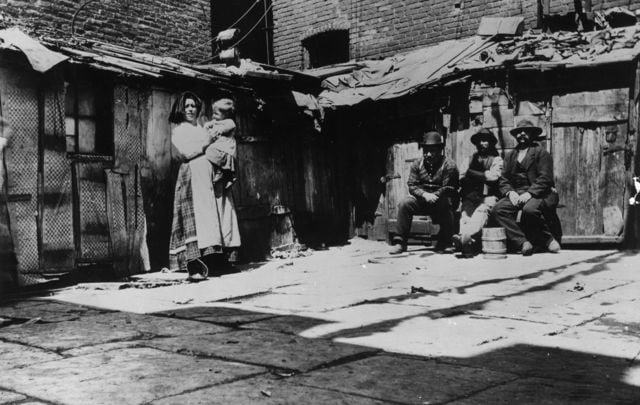 Is the Irish and Italian love/hate relationship a good premonition for struggling migrant groups currently moving to the US? Getty

How the newly immigrated Irish and Italians fought openly in the street but came to live peacefully together. A lesson for us all, even today.

In his 1970 book “The Gang That Couldn't Shoot Straight,” columnist Jimmy Breslin wrote, "Among the most overlooked racial problems in the country is the division between Irish and Italians."

Without a doubt, the Irish and Italians have had an... interesting past in the US. They began battling it out as soon as the Italians arrived. The arrival of this new group of immigrants from one of Europe’s poorest countries frightened the Irish, who felt their economic security was threatened.

Despite the fact that the two groups had Catholicism in common, the differences between the two nationalities were initially too great to be forgotten, leading to many street brawls and conflicts.

In a 2015 column for CNN, however, Paul Moses, author of "An Unlikely Union: The Love-Hate Story of New York's Irish and Italians," looks back at this troubled history - its saints and sinners - and takes it as a sign of how things will play out in the future for immigrants currently moving to the US and facing discrimination. If the Irish and Italians can put aside their differences and live together, can’t we all?

“Other immigrant groups from Latin America, the Far East, sub-Saharan Africa, and the Middle East are now encountering resistance in the latest burst of the anti-immigrant sentiment that has periodically permeated the American experience,” Moses writes.

“It's tricky to draw direct parallels between historical periods, but the history of the Irish and Italians shows that over time, America does come to appreciate groups that initially were treated with suspicion and fear.”

Italians began to arrive in the US in large numbers in the 1880s. They disembarked in a country that already had an established Irish immigrant community who had faced, and were still facing, the discrimination of “No Irish Need Apply” and the struggle to find employment and money.

As rivals, two of the poorest immigrant communities battled it out for jobs and a means of survival, and the Irish and Italians clashed everywhere from the streets to the political system. Mixing between the communities was rare, as were Irish-Italian marriages. A 1920s study showed that the Irish in New York were more likely to marry a German Jew than an Italian.

This conflict did not last forever, however, and as both groups made their way up the social ladder, the tensions evaporated, resulting in many happy unions.

“This is the very American story of the Irish and Italians: when people from once-warring tribes mingle and get to know each other as equals, the social barriers fall away,” Moses writes.

“That can take place in neighborhoods, workplaces, houses of worship, and recreational or social associations.”

“Studies have shown that for the Irish and Italians in New York, the Church was an especially important factor: in the years following World War II, Italians who married a non-Italian partner nearly always married someone of Irish ancestry. And the Italians who married Irish spouses generally went to Catholic schools and were regular churchgoers.”

According to Moses, this change is evident in the 2015 John Crowley movie “Brooklyn” starring Saoirse Ronan.

Adapted from the Colm Tóibín book of the same name, “Brooklyn” tells the story of a young Irish girl Eilis Lacey and her immigration to New York, where she meets Italian-American Tony Fiorello.

At dinner with Tony’s family, Eilis is told by his outspoken little brother Frankie that they don’t like the Irish, due to an incident where a family member was beaten up by some Irish men and the Irish NYPD cops let them away with it.

“A history of hatred had to be overcome before an Italian boy could bring an Irish girl home to dinner. (Italians were no more welcome in Irish homes). ‘Brooklyn’ catches up to the story in a moment of transition: in the years after World War II, the Irish-Italian rivalry turned often enough to romance and led to a wave of Irish-Italian intermarriage.

“In ‘Brooklyn,’ we see a hopeful story of how social barriers can fade away, person by person.”

And with that, does the same fate await immigrant groups discriminated against in the 21st century?

With good luck, we won't have to wait one hundred years to find out.