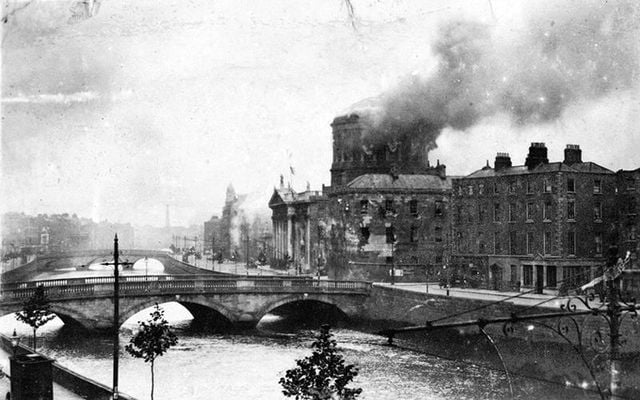 In June 1922, a massive explosion during the Irish Civil War destroyed the Public Records Office attached to Dublin’s Four Courts. Documents representing hundreds of years of history, including 19th century census records, centuries of Church of Ireland parish records, and thousands of wills and title deeds, were destroyed in the fire.

According to the Irish Times, the list of documents stored in the office’s record treasury department is 300 pages long and dates back seven centuries.

The Beyond 2022: Ireland’s Virtual Record Treasury research project aims to recreate as much as the archive as possible in a digital format that will be available to the public by June 30, 2022, the centenary of the fire. The initiative will retrieve as many of the lost documents as possible through duplicates found in other archives and libraries across the world.

According to Dr Peter Crooks, the project’s director, the number of duplicates identified in other archives already is “astounding.”

The Irish Times reports that three hundred bundles of documents which were saved from the fire and locked away for the last century in the National Archives have already been retrieved, and at least 200 volumes of transcripts have been identified in archives in Ireland, the UK, and the US.

Crooks said the attempt to recreate the destroyed archives has been successful to a “greater extent than ever previously imagined.”

“We are committed to producing 50 million words of searchable material by 2022 and that is possible with the artificial intelligence we are using,” he said.

“Tens of thousands of papers will be digitized, but they will also be searchable, which is a change. We will be able to mine this information for individual names.”

The National Archives, the UK national archives, the public records office in Northern Ireland, the Irish Manuscripts Collection and the library at Trinity College Dublin (TCD) are all involved in the extensive project.

According to Trinity College Dublin,  the lost Public Records Office will be reconstructed in 3D virtual reality, which will allow the public to "walk through" the destroyed building and explore the surviving records.

Beyond 2022 is already in its third year of operation. Taoiseach Leo Varadkar has recently announced a further €2.5 million for the second phase of the project through the Department of Culture, Heritage and the Gaeltacht’s Project Ireland 2040 fund.

The next stage of the project will invite the public to become involved in identifying documents which might be found in duplicate form.

Varadkar said the project will leave a “permanent, meaningful and imaginative legacy beyond the conclusion of the decade of centenaries.”

The project will be of vital importance to the Irish diaspora and anyone tracing their Irish roots.

More information on the project can be found at Beyond2022.ie.