Born to be a blacksmith, blinded and the finding music, born in 1670 this County Meath man's music continues to be played by the like of Planxty today. 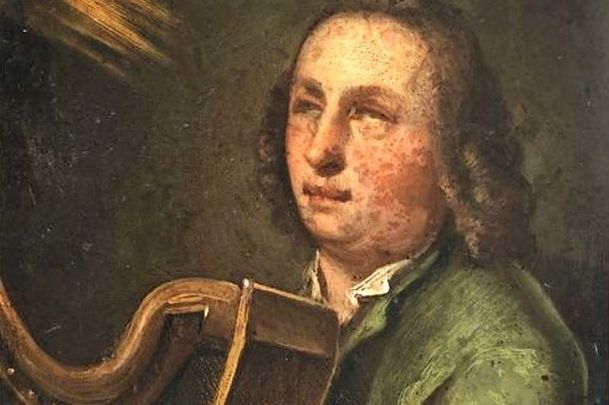 Born to be a blacksmith, blinded and the finding music, born in 1670 this County Meath man's music continues to be played by the like of Planxty today.

In the late 17th century, some old Irish families from Gaelic clans had managed to hold onto their ancestral lands, even after Oliver Cromwell’s brutal assault on Ireland and increasing thumbscrews of emerging Penal Laws.

Turlough O’Carolan, son of a blacksmith, was born in Nobber, County Meath in 1670. His family moved to Roscommon in 1684, where his father took the post of blacksmith to McDermot Roe and family, in Alderford House.

The lady of the house, Mary Fitzgerald McDermot Roe, liked the teenager and educated him over next two years. He showed promise in poetry and verse.

Education or no education, Turlough would have most likely been resigned to fact that he would be a blacksmith, just like his father. In fact, he was probably already apprenticed in the trade.

It was around then that he fell in love with one of McDermott Roe’s acquaintances, a young woman of higher birth, Brigid Cruise. Unfortunately, there was never going to be any chance of a union with their differing social statuses. Besides which, fate was to deal a cruel but providential blow.

At 18 O’Carolan fell ill with dreaded smallpox. Usually fatal, he fought the disease for weeks. He lived but was left completely blind. There’s no doubt that this must have left him profoundly depressed and worried about his situation in life.

To cheer him up, and perhaps thinking of his talent for verse, Mrs. McDermot Roe sent a harpist who was staying at the big house, Ruari Dall, to teach him the instrument. The age of 18 is quite old, even nowadays for someone to take up an instrument. But a kind and thoughtful act by Mrs. McDermot Roe yielded astounding results.

By age of 21, Turlough was showing extraordinary talents as a composer. With a new lease of life and a committed patron in Mrs. McDermot Roe, Turlough was sent on his way with a horse, a paid guide, money, and a harp to make his fortune as a bard.

This was best career option open to him and one he took up with gusto. O’Carolan’s first patron on road was George Reynolds, a landowner in County Leitrim. This was where O’Carolan composed Sí Bheag, Sí Mhor which means Big Hill, Little Hill, and refers to a site in County Meath where, according to folklore, a druid turned two battling giants into two hills. It’s a beautifully simple piece of music and is still very popular at Irish weddings to this day.

O’Carolan moved on traveling throughout Ireland, building a name for himself and writing songs called planxties which meant a song in honor of a host; his payment for their patronage.

He became quite famous after several years. It was purely because of his compositions. His actual playing wasn’t held in particularly high esteem; other harpists could play far better and with more fluidity.

He found himself in demand with not only Irish families, but also wealthy English ascendancy families, who wanted personalized compositions. O’Carolan built up a reputation for being partial to strong liquor and had quite ‘diva-ish’ traits. He was renowned for arriving late at weddings and funerals, and for getting into spats with fellow musicians. As his music progressed and he traveled to Dublin and interacted with gentry and glitterati of time, you can hear the influence of Vivaldi and Corelli in his compositions.

O’Carolan had written five airs in tribute to Brigid Cruise, his first love. But it had always been unrequited, and he eventually married Mary Maguire when he was fifty in 1720. They went on to have seven children.

After Mary died in 1733 he continued to travel to support his family. It is fitting that his life ended in the house of Mrs. McDermott Roe in 1738. He had been feeling ill for a few days before he arrived to visit his old benefactor. He seemed to know that end was nigh when he composed these last words:

Love of my breast and my friend,

Alas that I am parting from you,

O lady who succored me at every stage.

She sat at his bedside for his last hours. She made sure that he was buried in McDermot Roe family crypt in Roscommon, where he lies in rest. By the time of O’Carolan’s death, Penal Laws were in full swing and bardic way of life died out.

His work is still played by hundreds of Irish harpists and musical groups. The Chieftains, Planxty and The Dubliners all paid homage to Last Bard, and his music lives on.