The gift JFK presented to Queen Elizabeth during their only meeting

President Kennedy offered Queen Elizabeth what some consider an unusual gift during their 1961 meeting at Buckingham Palace. 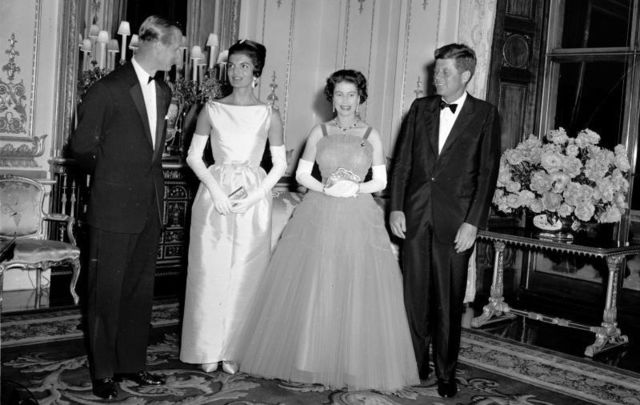 The gift that President Kennedy gave to Queen Elizabeth during their meeting at Buckingham Palace in June 1961 may surprise you.

In 2017, Vogue reported that the Kennedy gifted the Queen a photograph of himself, in a silver Tiffany & Co. frame. He signed it “To Her Majesty Queen Elizabeth II, with appreciation and highest esteem, John F. Kennedy.”

What a modest gift right?!

Read More: Remembering JFK’s visit with Queen Elizabeth ahead of her meeting with President Trump

However, as it turns out, this 1961 visit was not an official “state visit,” and therefore no extravagant offering was necessary.

Kennedy and his wife Jacqueline had planned to save their real gift for the British monarch for their official state visit later on in his presidency. Tragically, this visit never occurred as JFK was assassinated in November 1963, in Dallas.

It turns out that the Queen must have been quite taken with John F Kennedy’s 1961 gift. It seems that the Queen gifts all of her visiting dignitaries with the same gift – a small, silver-framed signed photographer of herself.

After his meeting with the royals, President Kennedy penned a note to the Queen which read: “May I also at the same time say how grateful my wife and I are for the cordial hospitality offered to us by your Majesty and Prince Philip during our visit to London last Monday.”

"We shall always cherish the memory of that delightful evening."