"Memories linger of a magical land called America and the home it gave to so many in my family and millions of Irish from sea to shining sea." 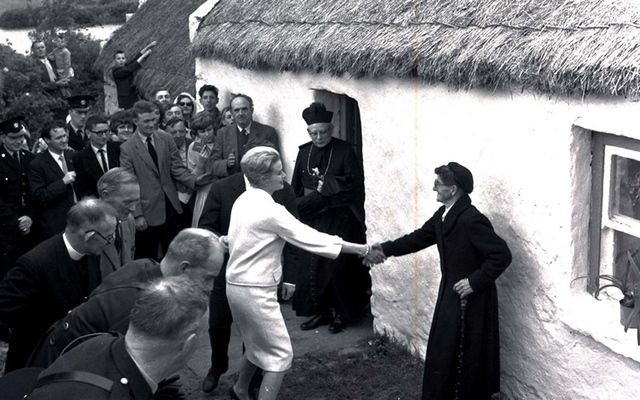 Grace Kelly was just one of many children of emigrants who returned home. Grace Kelly Film Festival

For generations in Ireland the wrench of emigration meant the poor land gave up its sons and daughters in droves.

For my father's family, who hailed from County Galway, it was no different. They were nine in number, in the 1920s/1930s, seven siblings departed these shores to seek their fortune. Only three, including my dad, returned, whilst four siblings settled and prospered in the States.

Sure, we all knew the great JFK story and his return home as well as Hollywood legend Grace Kelly but we had our own stories too, not so glittering but just as exciting for us.

As a small child, in the early 1960s I was aware of our family’s connection with these, for me, exotic people and their American families.

They lived, it appeared, in a magical world, a place where anything was possible. Occasionally, a surprise parcel, (bearing a gift, not likely to be found in any shop in Dublin) was sent to our home, courtesy of an American relative.

Those parcels were unwrapped with great anticipation and never failed to please us, the recipients. Christmas cards from America were glitzy too. Letters bringing news from my emigrant relations' adopted homeland were written on fancy notepaper; sometimes even with their names embossed thereon!

Color photographs of our American relatives seemed to confirm the vibrancy of their lives when set side by side with those of ours, black and white in hue. To this young child, Ireland was ordinary and I just knew my American relatives lived in a much more exciting place.

I recall the thrill, not least that of my dad, whenever a letter arrived announcing an impending summer visit “home” (for Ireland was long considered home) by our Yanks. On the day of the expected arrival of our visitors, my dad would drive his trusty Morris Minor Reg. JZC142 to Shannon Airport.

Sometimes, the Yanks hired a car at Shannon and my dad, with one or two of us in tow, drove to an agreed mid-way location between there and Dublin to escort the “VIPS.” Either way, he invariably arrived with at least two hours to spare.

Back home my wonderfully resourceful mother prepared a welcoming meal while, miraculously, sourcing the required extra beds. Upon their arrival, my aunts/uncles dispensed dollar bills to my sister and me ensuring, in so doing, they acquired loyal fans for the duration of their stay.

The holidays were spent in a haze of lazy days of news exchanged, cups of tea and summer salads. Excursions to Glendalough, and Howth Head were enjoyed, as it was likely my aunts and uncles, having left Galway some 30 odd years before (1920s/1930s), had never experienced the splendor of those sights.

Evening time saw a drop or two of Irish whiskey imbibed, (mostly by their Irish hosts), serving to oil vocal chords for the singsong of Irish Ballads. The trip back home to Ireland always included a visit to the family homestead, poignant, no doubt, for those emigrés, their parents now long gone. Those sons and daughters had left Ireland half a lifetime before.

At the holiday’s end, my dad, a little heavy in heart, ferried our visitors back to the airport. We kids would resume, what seemed to us to be, the ordinariness of our Irish childhood. At the airport, promises of making the “trip” again soon were spoken in determined tones. Indeed, that pilgrimage home was made by most of our American relatives, several times and at least once, by all.

Though my aunts and uncles are now long departed, a some of their offspring, my first cousins, maintain their connection with the land of their parents’ birth with regular visits home. One such person, my cousin Pat who's now in his 80s, has been a regular and most welcome visitor to these shores since 1962. The times may have moved on but the memories linger of a magical land called America and the home it gave to so many in my family and millions of Irish from sea to shining sea.