John F Kennedy's birthday was one of the rare times he had a break from the Presidency. 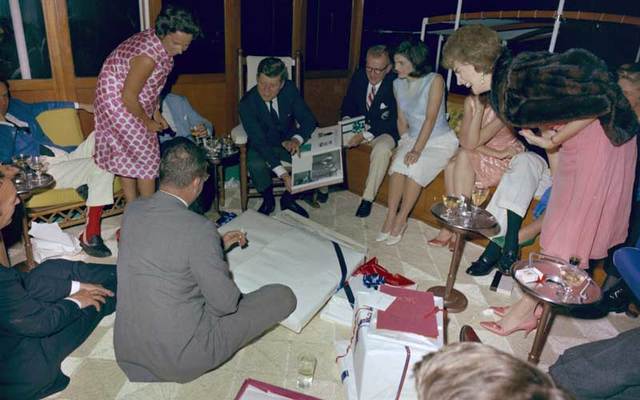 John F Kennedy's birthday was one of the rare times he had a break from the Presidency.

Today, May 29, is JFK's 101st birthday! We look back at some of his most extravagant birthday celebrations including what was to be his very last birthday.

It has not passed into folklore like his 45th birthday when Marilyn Monroe sang, “Happy Birthday, Mr. President!” to him, but JFK’s last birthday was just as lavish as you would expect for a man who lived such a glamorous life.

On May 29, 1963, Kennedy and about two dozen friends and family members gathered aboard the Presidential yacht, harbored in the Potomac River, and began a night of celebration.

The attendance of actors David Niven and Peter Lawford added Hollywood stardust to the event, and Mary Pinchot Meyer's arrival meant one of the President’s on again, off again mistresses brought an element of adultery to the occasion too. However, it was Toni Bradlee, Ben's wife that Kennedy sought out.

At one point, Bradley stated JFK chased her into the bathroom and made a pass, but she refused.

“I guess I was pretty surprised, but I was kind of flattered, and appalled, too,” she said later.

Ben Bradlee, who would later edit the Washington Post, recalled in later years that the partygoers indoors began the evening sipping cocktails out on deck, but rain saw them retreat indoors.

Toasts to the president were interrupted by good-natured heckling, and the 1955 Dom Pérignon was on tap.

Clint Hill, a Secret Service agent assigned to the Kennedy family, said the night was a rare break from the burdens of office for the President.

Read more: Best JFK quotes to celebrate the 100th anniversary of his birth 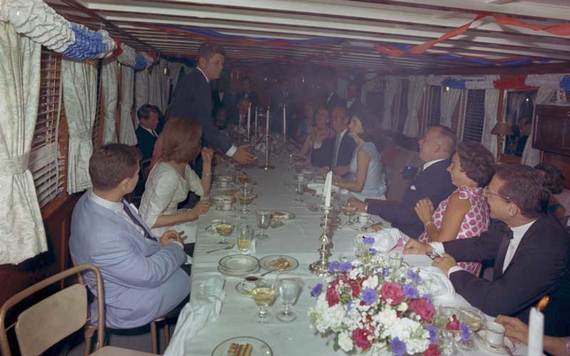 “I was very happy to be there that night, and that I could witness this, and be able to see him have such a wonderful time,” Hill told The Washington Post. “Presidents don’t have many relaxed times. It’s such a stressful job and to be able to see him and his friends enjoy themselves like that made me and the other agents feel good.”

Hill added that his favorite memory of the night was when Paul B. “Red” Faye Jr. - then Navy undersecretary - performed for the party.

“He got up and started singing some Irish song, and everyone was laughing.”

He also said that Senator Ted Kennedy “mysteriously lost one leg of his trousers sometime during the night.”

Another witness more precisely said the trouser leg was ripped off by a reveler - revealing the youngest Kennedy brother’s white underpants.

That was the worst thing that got ruined though during the night; family friend Clement A. Norton got so drunk he ended up trampling on Jackie’s gift to her husband - a rare engraving of a scene from the War of 1812.

“It had cost more than $1,000 and Jackie had scoured galleries to find it, but she greeted its destruction with that veiled expression she assumes, and when everyone commiserated with her over this disaster, she just said, ‘Oh, that’s all right. I can get it fixed,’” Bradlee wrote in his book about the Kennedys. “The boor of the evening turned out to be Clem Norton.”

Other gifts include a pair of boxing gloves he was told to use on Congress and a book on debating that may or may not have come from his opponent in the 1960 election, Richard Nixon.

Unlike most of the guests, Kennedy wasn’t drunk - but still joined in lustily with the singing of “Hail, Hail, the Gang’s All Here” at the end of the night.

It would be the last time the gang would gather together, until Kennedy’s funeral some six months.