Don’t blame President Trump for the lack of immigration from Ireland, rather blame Teddy Kennedy. 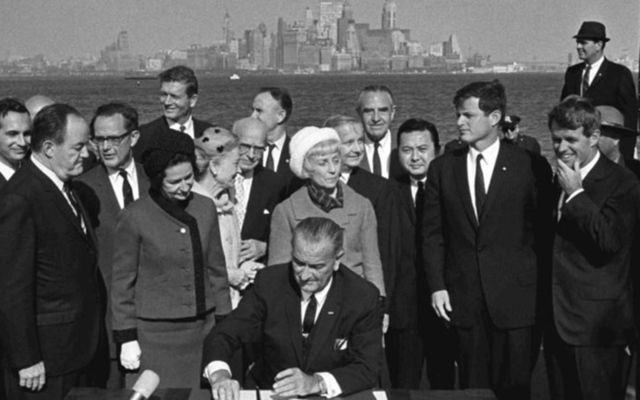 In the photo above: President Johnson signs the Immigration Act of 1965 at the Statue of Liberty. Senators Ted Kennedy and Robert Kennedy look on. The bill essentially ended Irish immigration to America.

Don’t blame Donald Trump for the lack of immigration from Ireland, rather blame Teddy Kennedy.

Donald Trump may actually help the Irish if he moves to a skills-based immigration policy. Under the current family-based system created by Kennedy’s immigration bill in 1965 the Irish have been all but wiped out.

The 1965 act raised quotas from countries that had been previously disadvantaged, namely those in Asia and Latin America, and established a system under which an immigrant with family in the United States was given preference.

This proved prejudicial to European countries like Ireland, whose immigration had slowed. Official statistics showed a drastic reduction in the number of legal Irish immigrants, with more than 70,000 coming to this country in the decade 1956-65, compared with only 10,000 plus in 1976-85.

Thus, was Ted Kennedy’s bill – nothing to do with Mr. Trump.

Kennedy apologized for outlawing the Irish in a 2006 statement.

Thanks Ted. The impact has been profound: by 2007, fewer than 170,000 people born in Ireland were living in the United States, less than one-tenth the number of the Irish-born residents during the late nineteenth century, even though the total American population was much larger at the beginning of the twenty-first century than it had been a century earlier.

There were warnings at the time of the 1965 Act that the Irish would be impacted. "Tip" O'Neill, later Speaker of the House, asked the Irish government if they wanted an exception in their case.

The government of the day amazingly replied no, sealing the fate of hundreds of thousands of their emigrants who have lived illegally in America since then. There was opposition from Irish American organizations, but Kennedy brushed it off.

His aides were worried about a bill that would take away Irish immigration to America, but Kennedy plowed ahead, aided and abetted by brother Robert, who was also in the Senate at the same time.

The previous so-called national origins policy was utterly discriminatory, but it would have been the right thing to ensure that mother countries of generations of American immigrants had some legal recourse to immigration.

Some southern Republicans strongly opposed Kennedy's efforts to end immigration as America knew it, but he moved past them.

It was the time of huge civil rights breakthroughs and Kennedy saw immigration in the same light.

On September 22, 1965 the Senate voted 76-18 to pass the new bill that utterly excluded immigration from Europe save in a very small percentage of cases.

We Irish are suffering the consequences since.

Judge John Collins, a young lawyer at the time of the 1965 Act remembers efforts made by an Irish group who stated they were “a committee of American Irish organizations and individuals who have banded together to protect the interests of those members of the Irish race who desire to immigrate to the US. We recognize that the former US immigration policy discriminated against some nationalities. Now, however, we find that the present law discriminates against the Irish."

A few statistics were provided – the monthly average number of Irish immigrants then entering was 99; It had been 448. In 1965, 5,378 Irish men and women immigrated to the US. In the first six months under the new law, 696 entered. At the same time, total immigration to the US increased 23,677 over the previous year.

At one Irish meeting, Collins says the tireless Father Donal O’Callaghan, a great advocate of the Irish, made a prediction that has proven eerily very close to the bone.

Fr. O'Callaghan, told his audience that if the 1965 law was not changed, the GAA (composed of many new immigrants) would be the first to go, followed by the United Irish Counties Association and then lastly the AOH. His prediction was right on target. All those organizations have suffered massive losses in numbers since the 1965 Act.

O'Callaghan was fond of quoting John Boyle O'Reilly on the topic.

Like the Minstrel Boy the harp will be heard no more because of the 1965 Act.

This one is on Kennedy, not Trump folks.