In the Netflix series The Crown's second season, Jackie Kennedy insults Queen Elizabeth to friends after they had attended a state dinner in June 1961 hosted by the monarch.

Jackie called her “a middle-aged woman so incurious, unintelligent, and unremarkable that Britain’s new reduced place in the world was not a surprise but an inevitability.”

The queen heard about the comments and was not amused. A few months later Jackie requested an urgent meeting and apologized to the queen revealing she and her husband had a drug habit and she had been off-kilter that night.

The Crown scene then is true. The Kennedy’s did indeed have a Doctor Feelgood whom they called on in times of need. 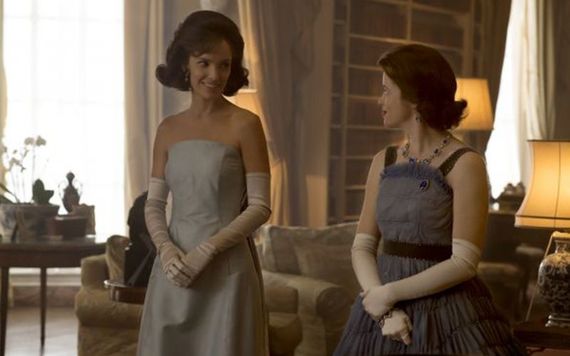 A still from the smash-hit Netflix series "The Crown" of the actresses who play Jackie and The Queen.

One such occasion was June 1, 1961. Jackie was attending a state dinner with her husband and French President De Gaulle at the lavish Hall of Mirrors at Versailles and was the star of the evening, ebullient, funny, speaking fluent French. President De Gaulle could not take his eyes off her.

Little wonder she was so happy. She was as high as a kite. In her bedroom, she was visited by Dr. Feelgood, Max Jacobson, the German-born physician-to-the-stars who concocted whatever drug combination you liked. Dr. Jacobson’s shots were a mixture of amphetamines, vitamins, painkillers, and human placenta. He called his concoction “miracle tissue regeneration.”

“You feel like Superman,” said writer Truman Capote, one of the famous clients. “You’re flying. Ideas come at the speed of light. You go 72 hours straight without so much as a coffee break… Then you crash.”

That night in Paris, only five months in office and extremely nervous both Jack and Jackie reached out for Dr. Feelgood.

Jackie Kennedy and French President De Gaulle at the lavish Hall of Mirrors at Versailles.

As historian Lisa Waller Rogers wrote concerning the night of the Versailles dinner, Dr. Max Jacobson “visited Jack Kennedy at the Palais des Affaires Étrangères. Jack occupied a suite of rooms called 'the King’s Chamber' in the elegant 19th Century palace on the Quai d’Orsay." The president soaked his back in “a gold-plated bathtub the size of a ping pong table” then Max gave him his customary injection.

“I don’t care if it’s horse piss,” the President said when told the drug concoctions were harmful. “It’s the only thing that works.”

Then he went down the hall where Jackie was getting ready in her palatial suite. Waller Rodgers writes, “She was ready for her shot. The short, dark-haired man with the red cheeks and German accent reached into his black doctor’s bag and withdrew a syringe.

"He injected his magic elixir into her buttock. She was ready for Versailles."

Indeed, she was and she utterly charmed them that night.

During her second meeting with the Queen, Kennedy told her the reason she had been so rude was the impact of the shot. It would be one of many.

Secret Service logs show Jacobson came to the White House more than 30 times in 1961 and 1962, to see both the president and the First Lady.

Jacobson became a much sought-after doctor among celebrities, but the New York State medical board learned of his excesses and took away his license. That 1961 night in Versailles with the world watching Dr. Feelgood had his greatest night.

Here’s some British Pathe newsreel footage of the couple’s mission to Paris: