The Irish origins of Lynching

The exact origins of Lynching - the mob-killing of a suspected criminal - are obscure, but they can be narrowed down to three Irish or Irish-American men. 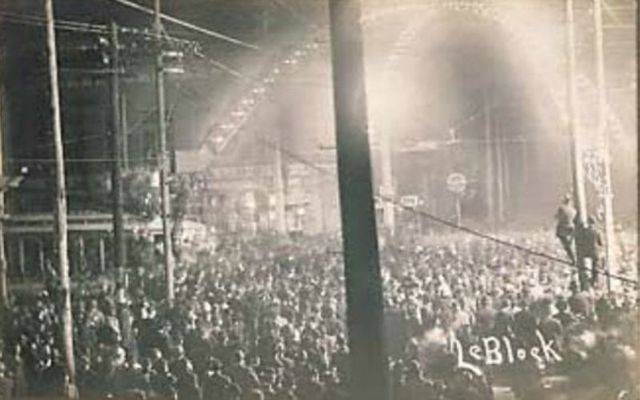 Thousands of people line the streets in Cairo, Illinois for the Lynching of Will James in 1909. Wikimedia Commons

While Lynching is synonymous with racism in the American South in the late 1800s, it can trace its origins back to Ireland.

The exact origins of Lynching - the mob-killing of a suspected criminal - are obscure, but they can be narrowed down to three Irish or Irish-American men.

The earliest - and most far-fetched - potential origin dates back to Galway in the 15th-Century.

Locals contend that James Lynch FitzStephen, the Mayor of Galway, strung up his son from an upstairs window for murdering a Spanish house guest in 1493.

Locals have erected a plaque commemorating the event and claiming that the famous term originated in the western county.

However, most historians believe that a cunning local invented or exaggerated to tale to draw tourism to the area in the 19th century after the term was already commonly known.

The term, therefore, is more likely to date back to two Lynches in 18th-century Virginia.

Charles and William Lynch both lived in Virginia in the 1780s and both have claims to be the origin of the term Lynching.

Charles Lynch as a Quaker and planter during the American Revolution. Lynch headed an informal tribunal that punished British loyalists during the war and he implored Congress to pass a law that exonerated him of any wrongdoing while he headed the court. The term "Lynch Laws" became common thereafter.

The laws allegedly gave Lynch the authority to punish suspected wrongdoers without having to bother with a formal, legal trial.

Charles Lynch first referenced the term "Lynch Law" in a private letter in 1782, making him the most likely origin of the word.

William Lynch, on the other hand, also headed a tribunal dealing with British loyalists in the aftermath of the American Revolution. William Lynch reportedly punished the loyalists with the help of his neighbors, but his link to the infamous term didn't surface until the 1830s.

While Charles and William Lynch both appear to have taken the law into their own hands to punish people who had wronged them, there is little evidence that they ever killed anyone.

Thus, the term "Lynching" appears to have taken on a more sinister meaning in the following century.

The word started to commonly appear in newspapers from the 1830s onward, but the action of lynching someone as a form of punishment only really became popular after the American Civil War in the 1860s.

Lynching is predominately associated with the Jim Crow Deep South and the hanging of black men by white mobs.

The word has strong ties to racism and the civil rights movement the Tuskegee Institute estimates that 3,442 black people were lynched between 1882 and 1968.

The victims were often left hanging in public places as a warning to others.

When or how Lynching became a tool for white supremacists is unclear, but one thing is perfectly clear - however unpleasant the term became, it can almost certainly trace its origins back to an Irish American settler in 18th Century America.