From Michael Collins' death, to rebuilt Ireland, sports, and the Bloody Sunday massacre - Irish history in film from the British Pathé. 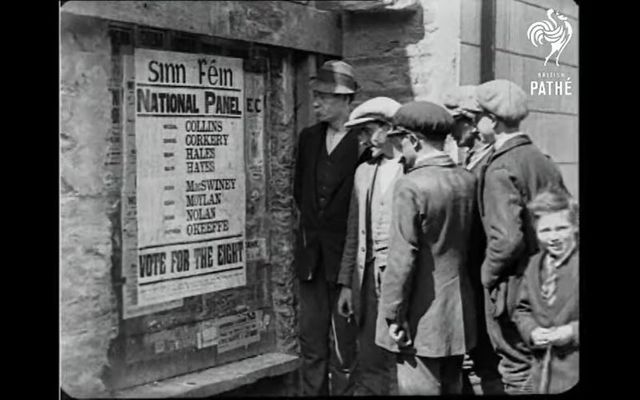 British Pathé news footage gives the world a glimpse into the relatively recent (but often forgotten) past of Ireland and the world.

One of the oldest newsreel film companies in the world, Pathé’s stylized clips were often shown in cinemas, right up until the 1970s.

Among the 90,000 historic clips that are free to view online are several featuring extraordinary footage of Michael Collins campaigning and as Chief of Staff of the new Irish Army and speaking at a mass meeting.

Dozens of Irish-related clips are included in the collection, with footage of Irish sporting highlights and many events from Ireland's first years of independence from Great Britain.

Here are just some of the snapshots of Ireland’s history this amazing news archive has provided:

“Intertitle: "NO ONE CAN INSULT OUR FLAG. Sinn Feiners – who had on Armistice Day, of all days, – torn down the Union Jack – were made to parade the village and re-hoist it."

“Start of the international football [soccer] game between Ireland and England…

Description: “The New Cork. A trip through Patrick Street with its many fine buildings.”

This footage was recorded by a camera fixed to a truck driving along St. Patrick’s Street, in Cork.

Seven years before this footage was taken many of these “fine buildings,” including the City Hall and Carnegie Library, had been burnt by the Black and Tans during Ireland’s revolution. During those seven years, Ireland had won independence, descended into civil war, and was beginning to recover.

The script is pretty laughable but this two-minute piece on road bowling is actually worth enduring. The clip shows Bill Desmond (21) and Joe Ahern (22) playing the traditional sport.

This is a compilation of footage of Dublin streets, shots of vintage neon signs.