The small town in Kingfisher County, Oklahoma is named after a Corkman by the name of Patrick Hennessy. The reason for the extra (E) in the town spelling is unknown. 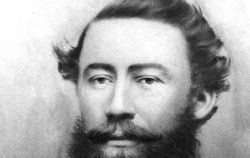 In Kingfisher County, Oklahoma lies a town small town called Hennessey with a population of just over 2,000 inhabitants.

The town was named after a Corkman by the name of Patrick Hennessy. The reason for the extra (E) in the town spelling is unknown.

Also in the town is a memorial to Roy V. Cashion (born 1881) who was killed charging over San Juan Hill in the Spanish-American war on July 1, 1898. Roy had enlisted in the "Roughriders" in May 1898 under col Theodore Roosevelt. The background of Roy Cashion is unknown but with a surname like Cashion (Ó'Caisín) there must be some Irish link.

Patrick Hennessy was born in Ballymacoda on the 10th of March 1837 to parents Patrick Hennessy and his wife Hanora (nee Walsh), the eldest of seven children. After school, Patrick had a spell in St. Coleman's college where he briefly considered joining the priesthood.

In 1860, Hennessy moved to Canada along with his two younger brothers Martin (born 1839) & John (born 1841). In 1862 Hennessy moved to America & enlisted in the 2nd regiment of the Illinois volunteer artillery & is believed to have fought in the civil war.

Before the town of Hennessy was founded in 1874, various plains tribes roamed the area in search of buffalo and other game. The area is close to Turkey Creek, a tributary of the Cimarron River. Between 1830-1880 an estimated 40 million buffalo were slaughtered by Settlers for conflict reasons against the indigenous Indian tribes.

After the civil war, the union army got into the business of gathering stray longhorns and herding them from Texas to Kansas in the thousands through the Chisholm trail. They herded cattle to railheads in Kansas where they were shipped East & sold for ten times the price. The trail was also used by cowboys for the same purpose.

The Chisholm Trail (a rough dirt track) was created by a famous native Indian called black beaver (1806-1880) and his merchant friend Jesse Chisholm (1805-1868). Chisholm was Scottish on his paternal side and Cherokee on his maternal side. On top of his cattle drives from Texas to Kansas. He was also an interpreter for both the US government and the republic of Texas in treaty-making with Native American tribes.

Black beaver was a Lenape trapper and fur merchant from Western Illinois. After the American Revolutionary War, a large amount of Lenape moved from their territory around the Delaware River to the mid-Atlantic states where Blackbeaver grew up. He could speak fluent English, Spanish, French & Various native American languages. He was invaluable to many settlers and the military carrying out expeditions out west as a guide

Blackbeaver escorted captain Randolph B. Macy and the first 500 emigrants from Arkansas to Santa Fe during the California gold rush of 1849. The journey took two months and on his return home found a route that took only two weeks that became known as the California trail that thousands of emigrants went on to travel.

After the civil war, Patrick Hennessy became a muleskinner (a freight hauler). The job on average paid a paltry 25 dollars a month. On July 4th, 1874, Hennessy led a three-wagon group hauling sugar & coffee South from Wichita Kansas to the Darlington Indian Agency.

They stopped at Buffalo springs for a layover and received warnings of Indian attacks and a report of the killing of a William Watkins two days prior. The group decided to proceed with their journey more than likely believing things had died down or they could avoid trouble one way or another.

Other noteworthy incidents at the time period were "The Lone tree massacre" that occurred in August 1874 in Meade county Kansas and "The German family massacre" on the morning of September 11th, 1874 also in Kansas.

The Cheyenne were supposedly up in arms because they felt the government wasn't doing enough to keep trespassers off their land and horses from being stolen. Freighters were allegedly running whiskey illegally on Indian land. They weren't happy and started carrying out attacks.

On the morning of the ambush on the 4th of July 1874, the four-man crew was spotted by a band of Cheyenne led by chief Medicine water. They headed south and lay await in the shale beds concealed in the canyon in anticipation of the wagons.

Patrick Hennessy was walking alongside the lead wagon when the ambush commenced. The four-man crew fought bravely but were quickly overcome by their assailants. A man on horseback who was coincidentally in the area for whatever reason raced the six miles back to Buffalo springs to report the incident.

Agent John Miles arrived with a group of men at the scene to investigate. They found all four men deceased and scalped. Patrick Hennessy's charred remains were found tied to a burned-out wagon. Controversy and debate still go on today regarding the incident. Some people believed it was outlaws disguised as Indians that carried out the ambush. The official report and the general consensus was that an Indian ambush took place.

In the 1930s a newspaper report quoted a Cheyenne Chief Howling Cloud where he claimed Patrick Hennessy was killed by a Cheyenne named Littlehand. Following the ambush, the group returned home for a victory dance.

Pat Hennessy was buried in a shallow grave nearby where the ambush took place on the 5th of July 1874. He was 37 years old. It became customary for people traveling the Chisholm trail to leave stones at his graveside. RIP!