How the Irish helped build Canada

The last Canadian census highlighted that the Irish are the fourth-largest ethnic group in modern Canada with over 4.5 million Canadians claiming full or partial Irish descent. This is nearly 14% of the population. 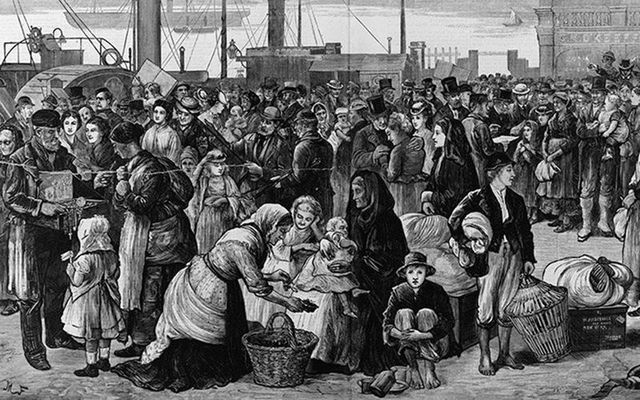 On May 31, 1847, forty ships lay off Grosse Île with 12,500 passengers packed as human ballast. GROSSE ÎLE AND THE IRISH MEMORIAL NATIONAL HISTORIC SITE

The Irish have played a pivotal role in the history of Canada involving themselves in every aspect of life and providing Canadian society with some of its most colorful and influential men and women.

The last Canadian census highlighted that the Irish are the fourth-largest ethnic group in modern Canada with over 4.5 million Canadians claiming full or partial Irish descent. This is nearly 14% of the population.

So how did the Irish come to Canada?

Most historians now agree that the first European adventurer to the North American continent was Leif Erikson, a Norse explorer who left his Icelandic colony to explore the Atlantic and founded a settlement called Vinland, in modern-day Newfoundland.

However, some speculate that another European, St Brendan the Navigator, was in North America hundreds of years earlier. Legend has it that Brendan who was born in 484AD, in Tralee was a noted explorer.

Brendan was immortalized as the hero of a legendary Christian tale of sea adventure, Navigatio Sancti Brendani Abbatis (“Voyage of St. Brendan the Abbot”). This Irish epic, written in Latin prose sometime between the mid-8th and early 10th century, chronicles that Brendan made an astonishing Atlantic journey with other monks to the “Promised Land of the Saints” which some now speculate was the coast of Canada.

Legend or not from the 17th century onwards. Irish men and women began to cross the Atlantic in growing numbers.

Because of close political and military links with rebellious Irish lords, many Irish were drawn to what was then called New France where they made up 5% of the population. Such is the early influence of these Irish settlers that some modern French-Canadian surnames derive from the corruption of Irish names. For example, Riel from Reilly, Sylvain from O’Sullivan, and Caissie from Casey.

In the 1780s, a Cork man Richard John Uniacke became attorney general of the colony of Nova Scotia and encouraged his fellow Irish to join him. In 1781, Captain Walter Patterson from Donegal became the first governor of Prince Edward Island and promptly renamed it New Ireland. In the province of New Brunswick. Irish made up almost a third of the population and were heavily involved in commerce and politics.

Fishing played a large part in early Irish emigration. Boats from ports such as Bristol regularly stopped at Wexford and Waterford ostensibly to take on supplies but also to recruit Irish crew and laborers for the expanding fisheries of Newfoundland.

‘An Gorta Mór’ was the terrible catalyst for the arrival of Irish immigrants into
North America in massive numbers. The famine and oppression of the late 1840s drove up to two million out of Ireland and hundreds of thousands took the perilous journey across the Atlantic.

These poor souls arrived in shocking physical condition overwhelming the quarantine facilities that authorities put in place to halt the spread of diseases such as typhus and cholera. In 1909, a large cross was erected in Quebec city to remember the 5,000 Irish emigrants who died on their arrival and the countless thousands who lost their lives on the coffin ships and who were buried at sea.

The wave of immigration was so dramatic that some Canadian historians record 1847 as ‘the year the Irish came’.

That year, 38,560 Irish landed in Toronto; this was roughly twice the existing population of the city. Many of them were sick and 863 Irish immigrants died of typhus in Toronto in 1847, almost all of them in "fever sheds" set up on the grounds of the town's hospital. Bishop Michael Power, the founder of St. Michael's Cathedral, ministered beside selfless nurses and doctors before succumbing to the disease himself on October 1st, 1847.

By the 1850s, over half a million Irish had immigrated to Canada. Many of them went south to the United States settling in cities across the border such as Boston and New York.

Those that remained tended to stay in the towns and cities and by 1871 the Irish were the largest ethnic group in every large town and city of Canada with the exception of the French-Canadian bastions of Montreal and Quebec City. However, even here they played a pivotal part in society with a Strabane man named Guy Carleton being credited with securing the language and religious rights of the French Canadians.

The Irish supplied a pool of cheap labor which helped fuel Canada's economic expansion through the 1860s and 70s.

As the second and third generations established themselves, the Irish began to exert influence in all aspects of Canadian Life. They also served as a vital bridge between the French and English elements of the young nation, sharing a religion with one and a language with the other.

Modern Canada would not exist without the Irish men and women who shaped its, politics, laws, and cultural Identity and it’s no false boast to claim the Irish helped build Canada.

Find your family history online - Ireland's 1926 Census is been digitized

Giving thanks for the Gettysburg Address and Lincoln's spectacular words