As Catholics, many Irish Famine immigrants were up against great odds in the US. 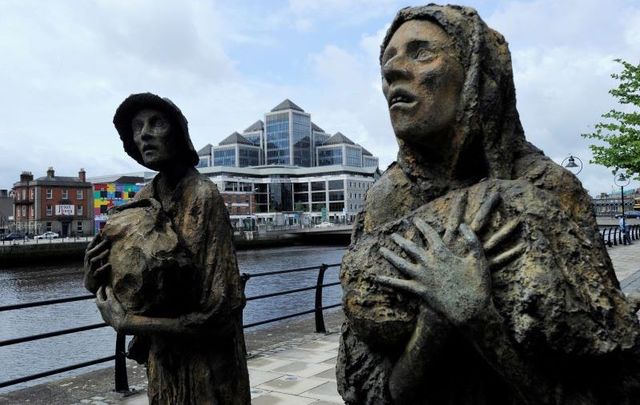 Famine Memorial on the Liffey River in Dublin. RollingNews.ie

Research conducted at Vanderbilt University in Tennessee found that the sons of Catholic Famine immigrants had less upward mobility than their counterparts.

Authored by William J. Collins and Ariell Zimran, “The Economic Assimilation of Irish Famine Migrants to the United States”, released in 2020, ultimately found that Catholic Famine-era Irish immigrants and their sons fared less well when compared to German and British immigrants, as well as American-born men.

A large part of the stagnant upward mobility was attributed to the “Catholicity” of surnames. Using information gathered from two Irish censuses, researchers developed an algorithm to determine how Catholic an individual might be.

When analyzing the mobility of children of famine Irish immigrants, researchers found that ”having a more Catholic surname and being born in Ireland were associated with less upward mobility."

The researchers also found that “children born in Ireland, even those who spent nearly their entire life in the US, fared worse than those born in the US, potentially reflecting exposure to famine conditions.”

While earlier Irish immigrants were viewed as “more prosperous” in the US, Irish immigrants during the Famine era displayed a “relative poverty, tendency to live near one another, and predominantly Catholic religion” which proved to be “barriers to their assimilation and, therefore, justified restrictions on immigration and immigrants’ rights.”

Additionally, researchers note, “mid-century Irish immigrants were subject to a sharp nativist backlash that was rooted in long-standing anti-Catholic sentiment in the US and heightened by the sheer volume of mass migration.”

Notably, Irish Catholic immigrants were at odds with the success of the Know-Nothing party, which “advanced the ideas that ‘Protestantism defined American society' and that ‘Catholicism was not compatible with the basic values Americans cherished most’” in the early 1850s.

However, as adults, the sons of Irish immigrants “greatly narrowed the gap in occupational status relative to natives in comparison to their fathers’ starting point”, but did not close it entirely, said the study.

Ultimately, the researchers note: "This paper speaks to both selection and assimilation questions from the perspective of perhaps the largest wave of disaster refugees that the US has ever absorbed.

"Despite the desperate conditions in which many famine-era migrants arrived and their relatively low levels of human capital, their children showed strong evidence of 'assimilation and contribution' in the labor market.

"Thus, the paper provides useful historical perspective at a time when refugees are once again viewed by many with skepticism and scorn."