Matt Loughrey of My Colorful Past is bringing historic photographs to life, quite literally, using animation technology. 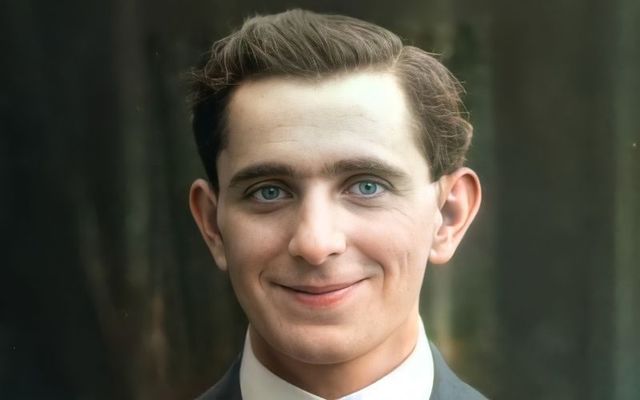 Loughrey restored and animated an image of 1916 Easter Rising leader Sean Mac Diarmada from 1910. My Colorful Past Instagram

An Irish artist is breathing new life into old black and white photographs with a new technology that animates historical figures and family members.

Matt Loughrey launched My Colorful Past in 2014 to colorize historical photographs but has now developed a new technology that allows him to bring old photographs, statues, and portraits to life using motion-tracking.

Loughrey's X-Oculi technology uses motion-tracking technology to animate 2-D images from the past, allowing him to bring a historical figure or a long-lost family ancestor to life like never before.

Loughrey spent much of lockdown recording faces - including his own - and created datasets from his recordings. He then applied the datasets to corresponding two-dimensional images with similar dimensions. Loughrey said that his technology relies on fine margins and that animations will look strange if the wrong recording is applied to the wrong image.

"The distance between the center of people's eyes varies from person to person by a few millimeters, but it makes a difference. You've got to find the right face to suit the right photograph," Loughrey told IrishCentral.

Loughrey believes that re-animated images will become more mainstream in the future as they give a new perspective on history through modern technology.

"Students in colleges and schools are availing of it and I think that speaks volumes. Is that not the end goal? You're infusing young people with history by making the most of technology and new media."

"Color is one step, but animation gives people a whole different perspective.

The X-Oculi technology can be applied to almost anything, provided the source material is reliable. Loughrey does extensive work to ensure that his restorations and animations are accurate, including using expansive databases to verify the correct color of clothing and using algorithms and hardware to distinguish between different shades of gray.

"If you're going to make these kinds of efforts with X-Oculi, the idea is that we use it on genuine, really well put-together source material."

He believes that his job is unique and pointed to the personal elements of his work. The artist said that his favorite aspect of his job is to colorize or animate an old photograph of a deceased family member and help a family see their late relative in a new light.

"People come to me to say 'can you animate my late father'. There is a great moral need for that. It has to be done for them. The service has to be provided for them because it completes a circle for them. It helps and it's good.

"Some of the feedback is really nice. I don't think there are many jobs like it. People always come back by email."

The artist experiences a huge surge in demand at Christmas time when people are looking for unique gifts for their loved ones.

"Christmas is great. So many people got these animations and restored photographs for Christmas and it was just great for them. They email you and they tell you about it and you make a friend. It's brilliant."

Loughrey recalled a recent incident when a customer asked him to colorize an old photograph of a dying relative, informing him that the photograph would be placed on the relative's coffin. Loughrey was delighted to help the family celebrate their loved one's life with a poignant restoration.

"People really need to travel back and see a loved one in color. That happens maybe once or twice a month."