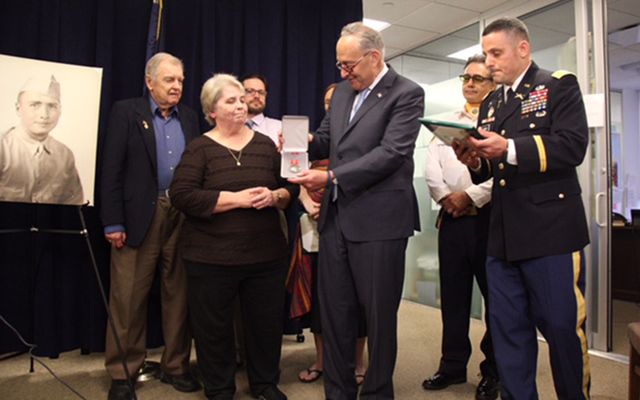 It was awarded an ocean away, lost on the other side of a river, found and returned to a Bronx family that includes in its long line a hero of the Second World War.

Bernard J. McNamara was that hero and among the medals he received for his service in Italy was the Purple Heart.

Bernard came home from the war along with his medals.

His Purple Heart, however, was to end up missing in action.

But not for ever lost.

It turned out that roughly a thousand McNamaras fought in U.S. uniform in World War II and dozens of them had the initials “B.J.”

The discovery of the Purple Heart was highlighted in press reports, and in particular by the Journal News newspaper.

Enter the office of New York Senator Charles Schumer which had the resources, connections, and the interest in solving the mystery.

After a considerable sleuthing effort, Schumer’s office found that the once lost Purple Heart had been awarded to a Bernard J. McNamara from the Bronx.

Unfortunately, he had passed away in 1975 but Schumer’s office successfully tracked down his next-of-kin.

It seemed that some of the children in the family had been playing with the medal and dropped it on the ground.

The man who had won it was born September 24, 1909. In April 1942, Bernard enlisted in the army.  Shortly after enlisting he married Ellen McNamara.

On December 9, 1943, he was wounded as a result of German artillery fire during a defensive stand at Monte Sammurco in Italy and was subsequently awarded a Purple Heart.

On January 22, 1944, Bernard McNamara was reported to the International Committee of the Red Cross as being held in Stalag 3B near Fuerstenberg, Prussia, where over 4,000 other American POWs were held. He spent at least 472 days as a prisoner.

When he returned to America, Bernard and Ellen lived in New York where they had two children.

Bernard was a dedicated employee of Con Edison, working there for over 45 years. After retiring, he and Ellen moved to Vermont. According to his death certificate, Bernard passed away on April 6, 1975, in Chittenden County, Vermont.

At last weekend’s gathering, Senator Schumer also presented the family with two additional awards that have been reissued to McNamara: the Bronze Star Medal and the Infantryman Badge.

Schumer, according to a release from his office, said that, unfortunately, these two awards had also gone missing and his office had requested that they are reissued for the family.

“It is a privilege and an honor to return this Purple Heart to the family of decorated World War II veteran, Bernard J. McNamara,” said Senator Schumer.

“McNamara was a true American hero and put his life on the line to serve this country. It’s unfortunate that the medal has gone missing for so long, but I am humbled to have the opportunity to present it to the McNamara family.

“This was a true case of Nancy Drew detective work by my office and I am grateful that my office successfully tracked down the family of its rightful owner so that Bernard’s legacy and a story of heroism can live on.”

The Purple Heart is awarded to service members wounded or killed at the hands of the enemy. It was established in 1932 on the 200th anniversary of George Washington’s birth. Since that time, approximately 1.8 million Purple Hearts have been awarded.

The Bronze Star is awarded to any person with the armed forces of the United States who, after December 6, 1941, secures distinction by heroic or meritorious achievement.

The Infantryman Badge is a military award given to personnel in the grade of colonel or below with an infantry or special forces military occupational specialty who have satisfactorily performed duty while assigned as a member of an infantry/special forces unit, brigade or small size, during any period after December 6, 1941 when the unit was engaged in active ground combat.