With movies and books already singing his praises, we look back on the live of Monsignor Hugh O'Flaherty on the anniversary of his death. 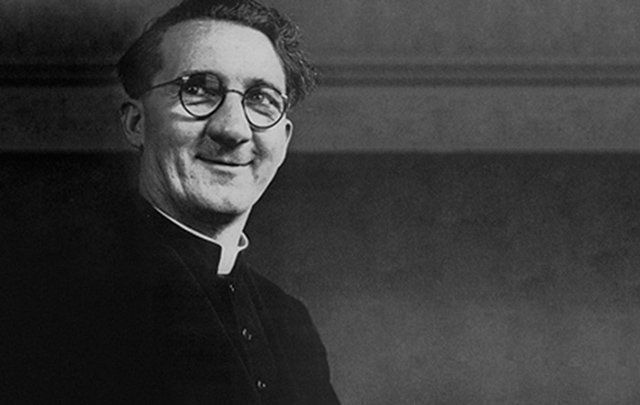 With movies and books already singing his praises, we look back on the live of Monsignor Hugh O'Flaherty on the anniversary of his death. WikiCommons

Editor's note: On October 30,  1963, the world lost one of Ireland's greatest heroes, the amazing priest Monsignor Hugh O'Flaherty  who risked his life during World War Two to rescue thousands from the Nazis. In honor of his life, we look back at this 2009 article paying tribute to one of the greatest of Kerrymen.

Monsignor Hugh O'Flaherty was a strapping great Irish priest with the solid look of a senior hurler, the kind of fixer-upper priest they used to produce by the hundreds in Ireland.

Hugh O'Flaherty on a horse in Haiti.

Monsignor O'Flaherty, originally from Killarney, Co. Kerry, lived in Italy during the darkest years of World War II, during which time he held a secretarial position in the Vatican. But he was no airy dilettante prepared to wait indifferently for one side to finally hammer the other. As the everyday reality of Nazi atrocities became irrefutable, O'Flaherty used his status as a priest and the safety of the Vatican to rescue over 4,000 allied prisoners of war and an untold number of Jews and other refugees from the hands of the fanatic Gestapo.

In author Brian Fleming's fascinating book, "The Vatican Pimpernel" (Dufour Editions), O'Flaherty's colorful story is told with all the admiration and humor the subject deserves. Fleming, a former Fine Gael member of the Dáil (Irish Parliament) and now the principal of Collinstown Park College in Dublin, clearly idolizes his subject, and his enthusiasm is infectious. How could you not enjoy the tale of a spirited 45-year-old Irish cleric outwitting evil at every turn?

A clip from "Scarlet and the Black". The true story of Monsignor Hugh O'Flaherty:

Although some found him a little rough around the edges, there's no questioning O'Flaherty's success. He earned his bachelor's degree in theology in one year and was ordained in 1925 at the age of 27. After that he served as vice rector of his college for two years, while earning doctorates in divinity, canon law, and philosophy.

After four years in the Vatican diplomatic service, he was appointed a notary of the Holy Office. Clearly he was a man who was going places.

Although helping the oppressed was very important to him, so was his golf game - O'Flaherty was Italy's amateur golfing champion. Fleming tells us he was also a superb boxer and a decent hurler.

Six-foot-two in wire-rimmed glasses and speaking with a beguiling Kerry lilt, O'Flaherty was no one's idea of a Vatican monsignor, but all Rome loved him.

When the war began in earnest and the Germans really began to crack down on the Jews and the anti-fascists, O'Flaherty began to shelter them in monasteries, convents and colleges and in his network of apartments. Escaped prisoners of war and Jews would come to him in the porch of St. Peter's in plain view both of the German soldiers, and O'Flaherty would smuggle them across the piazza and through the German cemetery to the college and safety.

But O'Flaherty's rescue work was deeply hazardous, requiring frequent trips outside the Vatican to coordinate securing food and shelter. Disguised as a beggar, a postman, a nun and once even as a Nazi, the daring monsignor operated an effective escape route for refugees without the knowledge or permission of his church superiors and in the face of constant death threats.

Very quickly the chief of SS forces in Rome, Colonel Herbert Kappler, gave top priority to killing every member of O'Flaherty's network, but they could not capture the man that author Fleming calls the Vatican Pimpernel. When the Allies entered Rome in June 1944, more than 3,900 of the refugees saved by O'Flaherty were still alive thanks to his efforts.

Controversially, CIA archives made public in 2000 a claim that the Nazis had an informer in the Vatican who gave information "wittingly or unwittingly" to the SS. Fingers suddenly pointed at the Kerry priest, but the charges were never proven.

It is certainly possible that O'Flaherty tried to deliberately mislead the SS because their documents which name him as a source give misleading information about proposed Allied landings in Italy.

Despite these recent upsets his legend, and his good works, have endured, and in 2003, the Israeli government planted a tree in his honor in Jerusalem.

O'Flaherty died in 1963 and is buried in the grounds of the Daniel O'Connell Memorial Church in Cahirciveen, Co. Kerry.

In a poem to celebrate his life, poet and fellow Kerry man Brendan Kennelly wrote of O'Flaherty, "There is a tree called freedom and it grows/Somewhere in the hearts of men/Rain falls, ice freezes, wind blows/The tree shivers, steadies itself again."

Have you seen a movie about Hugh O'Flaherty or previously read a book about him? What would you recommend?