In 1873 the “Silver Celts” discovered the greatest pot of gold and silver the world has ever known. 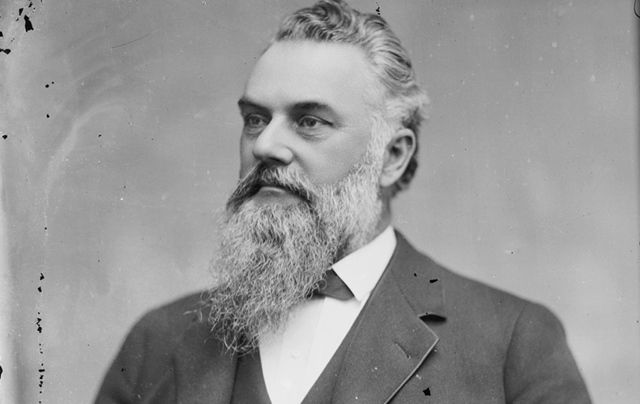 One of the Silver Kings James Graham.

Evidence of Irish golden mastery – going back to 2,200 BC – is displayed in the National Museum of Ireland – lunulae and sun disks, bishops’ golden crosiers, twisting torques, and embossed details of an unprecedented skill.

Perhaps it was those millennia of experience that, in 1873, led four Irishmen – Mackay, Fair, Flood and O’Brien – to the Comstock Lode, the greatest pot of gold and silver the world has ever known.  They located an enormous silver heart within Mount Davidson in Nevada.

The first to putter around above the great trove were a couple of surface gold miners named Peter O’Riley and Patrick McLaughlin.  These men did not know about nor have the resources to mine down thousands of feet to the silver; they panned for gold and moved on, not realizing that a blue sand that clogged their simple wooden machinery, was in fact silver mixed with gold.  Assayed later in 1859 by other men, this sand proved to be “almost a solid mass of silver,” and the silver rush was on.

Eventually it took stockholders, powerful machinery, new mining techniques, and millions of dollars to penetrate the pile and extract billions in silver and gold.  Chief among those who pioneered and benefited from the lode were the four Irishmen.

First and foremost, comes John W. Mackay (pronounced MACK-ee).  Born in Dublin in 1831, he came to New York with his family nine years later.  His father died shortly thereafter, and John left school and went to work to support his mother and younger sister. At age sixteen he was apprenticed to a shipwright, a maker of side-wheel steamers, and became skilled in the use of tools.

In 1851, Mackay came to California and worked in placer gold-mines in Sierra County.

With the discovery of silver on the Comstock Lode he went to Nevada, hiring out there to work as a $4/day miner.  From this he graduated to providing mine timbers, running tunnels, sometimes being paid in mining stock, becoming a trustworthy mine superintendent and then mine-owner himself.

Fair was born in Clogher, County Tyrone, also in 1831.  In the early 40s his parents brought him to America and at sixteen his father wanted him to study law.  Instead he ran off to Chicago and found work in a machine shop.  Two years later he joined the rush to California.

He was known for his native shrewdness, was “a stocky, powerfully built youth, with dark skin and eyes, curly black hair, and handsome features; a typical black Irishman.  In the foothill gold camps at Feather River he applied himself to learning the simple techniques of placer mining – keeping his eyes and ears open and his purse-strings drawn tight.”  Like Mackay, he loved the life, the hard work, the gambling instinct.  After ten years of working in California, he owned mines and mills. He did not rush towards the silver in Nevada but in 1865 ambled over there.

Becoming the superintendent of many Nevada properties, Fair used his extensive technical training and managerial experience to operate properties efficiently with little extravagance or waste.

He recognized the potential of the Ophir mine on the Comstock and he convinced the other three Irishmen to invest in it with him.

By late summer 1872, when their stockholders had about had it with assessments for further exploration, Fair noticed a knife-thin vein of ore in the mine.  It began to widen – in four weeks it was twelve feet wide and rich…

Flood and O’Brien, the other two Irishmen of the Bonanza Firm, were former saloon-keepers turned stockbrokers who had teamed up in San Francisco in 1856.  James C. Flood was born in 1826 on Staten Island to Irish immigrant parents.  With an eighth-grade education he was apprenticed to a carriage maker.  In 1849 he sailed for San Francisco and the Gold Rush, practicing the trade of carpenter as well as surface-mining for gold.

The quietest of the Fabulous Four, William Shoney O’Brien, born in the town of Abbeyleix, County Laois was brought to New York as a child. He worked as a clerk in a grocery store, and, in July 1849 at twenty-three years of age, O'Brien arrived “penniless and ragged” in San Francisco.  He found work unloading ships in the harbor.  Before long he owned his own marine supplies, newspaper and tobacco store there.

In 1857, he and Mr. Flood opened up the Auction Lunch Saloon on Washington Street in San Francisco.  The quality of their free lunch, their geniality and fair prices made them popular.

When in 1862 the San Francisco Stock and Exchange Board opened its doors nearby, stockbrokers favored the Auction Lunch and often gave trading tips to the personable proprietors, who thus became rich. They gave up the saloon and became full-time stockbrokers themselves.

So it was that when two mining superintendents, Mackay and Fair, with their noses for underground treasure, working in vast cathedral-like spaces underground, sensed in 1868 that they were approaching a great strike, they teamed up with the two San Francisco Irishmen to quietly buy up all the stock of the mines which they felt would lead down, far, far down, to the bonanza.

Their instincts were accurate.  The mighty machinery, mills, elevators, “miles of woven steel cable on which cages were raised and lowered (at express-train speed) in vertical shafts more than half a mile deep; drills and picks and shovels by the gross…” needed to extract ore at such unprecedented depths were manufactured in San Francisco at the Union Iron Works of immigrants Peter, James and Michael Donahue.

The Comstock Four stuck together as a team for many years, even, in 1875, opening the Nevada Bank, which, during the height of the silver boom became for a time the largest bank in the United States and which, in 1905, merged with another bank to form Wells Fargo.