The true history of “Long Way to Tipperary” revealed

The Irish song was even sung by the Germans and sold 6m copies, but where did it come from? 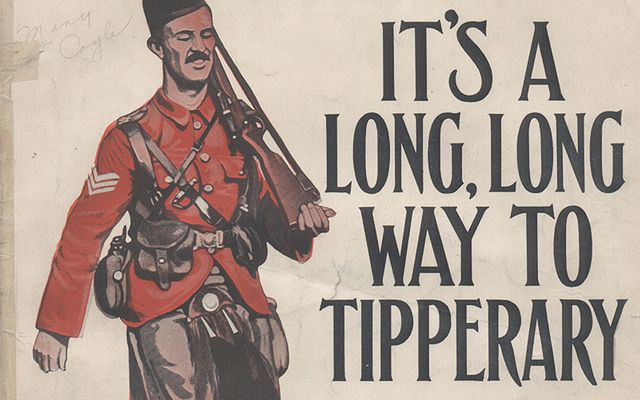 It's perhaps the most famous Irish song of all, but although most regard it as a British song, new evidence shows it is part of both cultures.

"It's a Long Way to Tipperary" is universally known, so much so, that German soldiers even used to sing it in translation during the First World War. It sold 6 million copies worldwide at its height.

But where did the song come from about a British soldier longing for his sweetheart in Tipperary?

The song was composed by Englishman Jack Judge in January 1912, two years before the First World War broke out. Judge was a former fishmonger turned producer and he claimed to have written the song overnight.

An article in the Financial Times, however, seriously disputes that and proves otherwise. Judge had co-written a song previously called "It's a Long Way to Connemara" about a young Irish lad missing his Connemara sweetheart with a man called Harry Williams, who was confined to a wheelchair after a boyhood accident and who was described by his great-niece Meg Pybus as a "sensitive and sickly man."

Judge swapped Connemara for Tipperary, where his own grandmother actually came from and sold the publishing rights to Bert Feldman, who created an upbeat marching tune for it. Feldman listed Judge and Williams as co-writers.

The song went viral. It sold three million copies in the UK and six million worldwide. Its fame peaked when Count John McCormack, the Pavarotti of his day, recorded it. In 1915 alone the two co-writers earned more than $750,000 in royalties, a fortune for the period.

Incredibly, even today the song brings in about $40,000 for the writer's family as the copyright has not run out.

The first public mention of the song's immense popularity was when Daily Mail journalist George Curnock reported that a battalion of Connacht Rangers got off the boat in France singing it. The Mail published the words and the rest was history.

Young  men marching off to war sang it in tandem with another air "Pack Up Your Troubles in Your old Kitbag."

Judge fell on hard times and sold his half to Williams. Williams donated a large sum to help the wounded from the war.

A bawdy version of the song also took hold entitled "That's the wrong way to tickle Mary," but we can go no further as it becomes an x-rated version say the experts.

It even became a Snoopy meme as the “Peanuts” character fancied himself a World War One flying ace.

In one cartoon Snoopy is walking so long a distance to Tipperary that he lies down exhausted and notes, "They're right, it is a long way to Tipperary." On a different occasion, Snoopy walks along and begins to sing the song, only to meet a sign that reads, "Tipperary: One Block.”

The song's most famous appearance is in the best selling play and later powerful anti-war film "Oh What a Lovely War."

US mother campaigns for murdered daughter's remains to be exhumed