Irish people engaged in "survivor cannibalism" to stay alive during the Great Hunger, according to a new documentary. 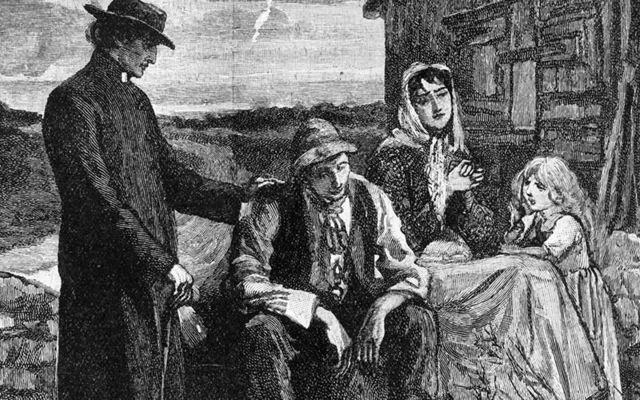 Depiction of Ireland during the Great Hunger. Getty

A new documentary tells the shocking and tragic story of how some Irish people turned to survivor cannibalism to stay alive during the Great Hunger of the 1800s.

Entitled "The Hunger: The Story of the Famine", the documentary is narrated by Liam Neeson and has been produced to mark the 175th anniversary of the beginning of the Famine.

It is the first major documentary by RTÉ exclusively about the Famine and it tells the story of how Irish people turned to putrid pigs, dogs, and donkeys during "Black 1847" - the worst year of the Great Hunger.

Written and edited by Ruán Magan, the new documentary also explores how incidents of cannibalism were recorded in Galway and Mayo as people desperately sought to avoid starvation.

Professor Cormac Ó Gráda, one of the world's leading experts on the Famine and an emeritus professor at UCD, told the documentary that some people who lived during the Famine engaged in "survivor cannabilism".

"Survivor cannibalism is trying to live on the corpses of people that predeceased you. They might be related to you or they might not," he said in the documentary.

"If you don’t believe that this happened or could happen, then you don’t understand what famine is about."

The documentary examines a letter sent by Fr. Peter Ward,  the parish priest of Partry in County Mayo, to his archbishop, where he described the scene when he came across a dead family in the village of Drimcaggy.

"In the village of Drimcaggy four were dead together in a poor hut- brother, two sisters, and daughter. The flesh was pulled off the daughter’s arm and mangled in the mouth of her poor dead mother-her name was Mary Kennedy," the letter said.

Produced in conjunction with University College Cork, "The Hunger: The Story of the Famine" also poses the question of whether the Famine was a genocide.

It also examines the role of Sir John Russell, the Liberal British Prime Minister who was elected to power in 1846 - one year after the potato crops began to fail.

Under Russell's leadership, the British Government diverted just £8 million of its £300 million expenditure on Famine relief and actually spent £14 million on security in Ireland during the same time.

Lisa Burke, assistant editor of "The Hunger", told RTÉ: "One of the most shocking things I learned working on this project, was the amount of food that was actually in Ireland during the famine, but it was not made available to those who were starving and in need."

The British Government also decided to place the financial burden of the Famine on struggling landlords rather than divert more taxpayer money toward Famine relief.

However, it was not just the British Government that caused widespread devastation in Ireland and filmmaker Ruán Magan told the Irish Times that he wanted to focus on the four million Irish people who survived the Famine relatively unscathed.

He said that most of those people showed great charity during the darkest time in Ireland's history but that a small portion of Irish people, including some Catholic landlords, were among the least charitable and forgiving in the country.

"You can blame the Brits, but maybe we need to take a look at ourselves too to see what happened," he said.

Magan told the Irish Times that these controversial topics made RTÉ reluctant to make the film in the past.

"They may have been worried about upsetting certain apple carts, but I think a lot has changed since the commemorations of 2016. Now we are able to look at things with a colder eye."