Ireland's lesser-known Famine, the history of the Year of the Slaughter

Known in Irish as Bliain an Air, Ireland's famine in the 1700s was almost as devasting as The Great Hunger. 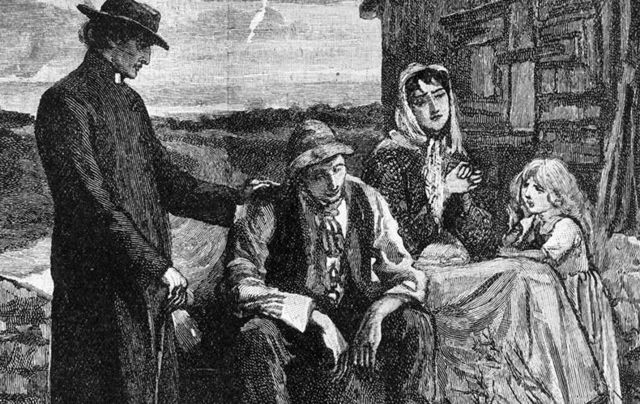 We all know of the Great Famine of the 1800s but what of the Year of the Slaughter during the previous century? Getty

We are all familiar with An Gorta Mór or The Great Hunger that ravaged Ireland in the 1840s after the failure of the potato crop. but a less well-known famine took place in the years 1740 to 1741.

What is known today as the Little Ice Age, held Europe in its grip between the 14th and the 19th centuries? Although not as extensive or as cold as the ice age we are familiar with from school it caused untold damage across Europe. Alpine glaciers expanded their ranges annihilating farms and villages in Switzerland, France, and Austria. By the middle of the 18th century, The Little Ice Age was beginning to loosen its grip. It did however have one final convulsion that would have devastating results – especially in Ireland.

In 1740, Ireland had a population of approximately 2.5 million people, most of whom had a varied diet of grains, potatoes, fish, and occasional meat. The potato had yet to take over as the main source of food so diets varied based on location, land quality, and other factors.

Following a few decades of mild winters an unusual and sudden climatic change known as The Great Frost hit Europe. Starting in December 1739, Ireland along with continental Europe, from Scandinavia to Italy, saw temperatures plummet dramatically.

To this day scientists differ on the causes for this significant temperature reduction. Some believe that the cause was a vast high-pressure system that prevented warmer air from following its usual path while others are of the school of thought that a lack of sunspot activity led to the freeze. Whatever the reasons, there is no disputing the consequences.

Rivers and ports froze over, killing fish and making sea trade impossible. Stored grain froze making it useless, while potatoes buried in pits also froze rendering them inedible and, in the process, destroying the seed potatoes for the following year’s planting. Although hardly any snow fell, one surviving outdoor temperature reading is described as “32 degrees of frost.” It would have been very difficult for people of a temperate climate to contend with such cold.

"…Beneath the glassy gulph
Fishes benumb’d, and lazy sea-calves freeze
In crystal coalition with the deep."

The Spring of 1740 saw a slight warming trend, but the expected rains did not come. By the end of April, whatever winter wheat that had not frozen now died of drought. A similar fate befell cattle and sheep by the thousands. Given that the stored grain and potatoes were already destroyed by the frost the stage was set for disaster.

Savage cold returned in October 1740 followed by blizzards, a warm-up, and flooding. Food riots took place in the cities as prices for staples such as bread skyrocketed. By December of that year reports of sickness started to emerge.

In Cork, the Newcastle Courant newspaper in its December 27th issue reported that “…an uncommon Mortality among the poor People by Fevers and Fluxes, owing no doubt in a great Measure to their poor Living, the Price of Corn being risen to an excessive Rate…”.

Soon reports of typhus and dysentery were coming in from all over the country. This pattern of sickness and starvation continued until June of 1741.

Obviously, the idea of a modern social safety net did not yet exist, some efforts at relief were made by city councils, members of the Clergy, and some of the Landed Gentry.  Although the relief efforts were made in good faith, given the scale and suddenness of the disaster, they provided little more than window dressing.

Church of Ireland Clergy solicited donations which resulted in the distribution of ten tons of flour and eighty tons of coal in the first few weeks of the frost. The

Lord-Lieutenant prohibited the export of grain to any country except England.

In Celbridge, Co. Kildare Katherine Connolly commissioned the building of what became known as The Connolly Folly to provide work for the local population. Three years later she would have The Wonderful Barn built as a hedge against future food shortages. These structures can still be seen today.

In June of 1741, five vessels loaded with grain were finally able to dock and unload in Galway. By July the price of grain finally began to readjust to pre-famine prices.

The toll of the Year of The Slaughter

Although numbers are hard to come by due to inadequate record-keeping, the year 1840 fully deserves its moniker as Year of The Slaughter. It is believed that in 1840 upwards of 400,000 people died. This implies that approximately 15% of the population perished, making Blian an Air, in terms of deaths, a proportionally greater disaster than the Great Hunger.

Unlike the Great Hunger, this famine was not followed by mass emigration which allowed the population to recover in an unprecedented population explosion over the next hundred years.

By 1840, the population of Ireland would number over eight million. This huge increase in population combined with potato blight and hardening English attitudes led directly to the tragedy of The Great Hunger.