Irish America was essentially created by the Famine and its aftermath according to Ireland’s President Michael D Higgins. 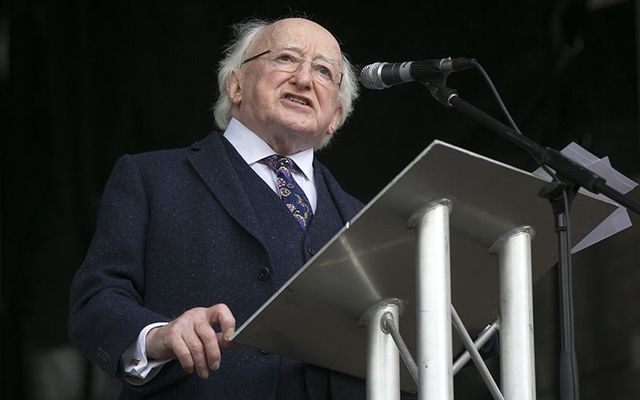 Irish America was essentially created by the Famine and its aftermath according to Ireland’s President Michael D Higgins.

Irish president Michael D. Higgins stated that it was the heartless British political system of laissez faire, allowing events to take their course with no intervention that caused the Famine suffering more than any one thing.

He was speaking at the annual Famine Commemoration event held this year in University College Cork. A special constructed peasant’s pitiful home from famine times was constructed on campus.

“Science in time did address and conquer the Blight, but the economic theory which guided or misguided the response, and its sustaining ideology is another matter. There is great truth to that most powerful of statements, that Ireland was ‘a nation perishing of political economy.'

The annual National Famine Commemoration took place in Cork today. President Michael D Higgins - alongside ambassadors from 52 countries - laid wreaths as a mark of respect for all those who died or emigrated during the Great Famine pic.twitter.com/dAI7Nnx0fu

"The phrase is often attributed to John Mitchel, and while he did utter it, the phrase was first spoken by a Church of Ireland Clergyman, Richard Townsend, who devoted his time in Skibbereen to the care of the poor and the sick, and who toiled tirelessly in the town that, with Schull, was given the title ‘Two Famine Slain Sisters of the South’. Of the 43,266 souls in Skibbereen in the Spring of 1847, many of whom had fled the countryside, 22,241 died and 997 emigrated.

"Only a pernicious and dangerous economic orthodoxy could morally sanction poverty amidst plenty, conspicuous consumption amidst mass slaughter – an ideology that elevated the right of Irish America was essentially created by the Great Hunger and it anchors the continued bond between Ireland and America. He also stated that the British political system of laissez faire, or refusing to interfere to end suffering was the worst aspect of the Great Hunger."

He was speaking at the annual Famine Commemoration held this year in Cork at the university there.

"The authority and economic and social power, in Britain and it had its adherents also in Ireland. It sourced and sanctioned, not only the withdrawal of Government support during Black ’47, but also, as Amartya Sen and Mike Davis have reminded us, would be invoked to rationalize the monumental catastrophes suffered by the Indian people and the inaction of the British Raj during the Indian Famines of 1876-1878, 1896-87, and 1899-1900."

He stated “Coming to terms with An Gorta Mór would be a slow process in collective Irish consciousness, and indeed in historiography. “

Higgins said “The Great Hunger, though not the sole foundation event in the formation of the Irish diaspora - after all, over a million Irish people had emigrated to North America between 1815-1845 – must yet still be considered the single most important event in the formation of a distinct Irish-American cultural identity, one that anchors the enduring bond between Ireland and the United States that we still treasure today."

President Higgins speaking at the 'National Famine Commemoration' in #UCC this afternoon about the effects of the famine on #Cork City and County pic.twitter.com/Ne4Zc2K7PW

He also discussed the horrific housing conditions that people were forced to live in and could be ejected from by landlords at any time.

“One of the most striking innovations of the 1841 Census was the classification of the housing stock by reference to its quality. In that census, forty percent of Irish families were recorded by the enumerators as living in nearly half a million of what was called a bothán. These were one room mud-huts described on the Census as ‘fourth-class houses’. On the eve of the Famine, the Devon Commission appointed by the British Government reported of the bothán that ‘it may be assumed that these fourth-class houses are generally unfit for human habitation'.

"The families who lived in a bothán were drawn overwhelmingly from either the over 3 million landless agricultural laborers in Ireland at the time, or the nearly one and half million cottiers that were leasing tiny plots of land, often only enough to keep their families alive. They, like the tenant categories above them, had no security of tenure, but were frequently without the means of survival itself, and with nothing to sell were without the means to flee. The English journalist Joseph Kay was appalled to learn that their homes were simply destroyed when they were evicted:

"If they do not pay their rent at the proper time, they are liable to be turned adrift, even in the middle of the night, into the bleak road, without a shelter, and with their helpless wives and children. No notice is necessary; no notice is given.’ Joseph Kay, Free Trade in Land

"These classes of men, women and children in the lower reaches of a pyramid of class – the laborers and the cottiers – bore the very worst consequences of the Famine.

"They are, in statistical terms, more likely to be found amongst the far more than one million who died. If some were lucky enough to be assisted, they are among the two million who emigrated, or amongst the countless others who, without the resources to emigrate, gathered in the large towns and cities.

"Many too amongst the countless others who, without the resources to emigrate, gathered in the large towns and cities, for between 1844 and the 1850s many, including pregnant women, took to the roads to survive. The 1851 census records only 135,000 habitations described as bothán, testament not to any program of assistance but to the obliteration and destruction of any record that these families had even lived their lives on the land.

"The re-created bothán erected by the staff of this university is thus a fitting acknowledgement of the many hundreds and thousands who lived, who died, who fled or were forced from their homes during An Gorta Mór. It is an extraordinary and valuable symbolic act of ethical commemoration and a contribution to our understanding of history. May I today salute all those who volunteered their efforts, their skills, and their energies to build what will be, for the time that it stands, a most fitting monument.

"The president stated that while emigration was a huge part of the Famine the internal displacement was also profound.

“Between 1846 and 1855, 2.1 million people left this island, more than in the previous two and half centuries combined. 1.5 million of those went to the United States. An editorial in The Times of London would later state that it is there the Irish Famine of the 1840s would become a central part of collective memory, with all the difficulties this ensues, and a significant component of American politics.

“Yet the very vastness of these numbers of emigrants, and their vital importance to the course of Irish history, may sometimes obscure the enormity of internal displacement during An Gorta Mór. The population of Cork City expanded greatly during the Famine, as refugees streamed into the city from across the country, causing panic amongst the citizenry. During Black ’47, the Cork Examiner described:

"[T]he incursion of rustic paupers into the city continues unabated... they wait on the outskirts of the town till dark, when they may be seen coming in droves… 300 of these miserable creatures come into the city daily, who are walking masses of filth, vermin and sickness.

"Ireland of the late 1840s had not experienced the impact of the public health reforms championed by Edwin Chadwick. Sanitation and water supplies were compromised, leading to a huge incidence of diseases such as typhus, yellow fever and in 1849, the dreaded cholera, was recorded amongst the refugees. In his testimony to a House of Lords Committee in 1847, Father Theobald Mathew, whose statue adorns St. Patrick’s Street, described his efforts to bury the dead:

"Each Day there was a large pit dug, and all that died that Day were put down; the Pit was covered up; I had four Men employed. Some Days there were Sixty or Seventy a Day buried, and some Days more."

He went on to chastise the civic authorities for their inhumane actions:

“Those poor Creatures, the Country Poor, are now homeless and without lodgings; no one will take them in; they sleep out at Night. The Citizens of Cork have adopted what I consider a very unchristian and inhuman Line of Conduct. They have determined to get rid of them. Under the Authority of an Act of Parliament they take up sturdy Beggars and Vagrants, they confine them at Night in a Market Place, and the next Morning send them out in a Cart Five Miles from the Town, and there they are left, and a great Part of them perish, for they have no Homes to go to. When they fled from the Country their Houses were thrown down or consumed for Fuel by the Neighbours who remained, and those poor Creatures have no Places to lay their Heads.

"They have no Place to go to. We have no Settlement Act in Ireland, and they have no Claim upon any Union. There is a Cordon of Special Constables around the City to keep them out; still they contrive at Night to get into the City again, and the same Process goes on. Report from the select committee of the House of Lords on colonization from Ireland, H.C., 1847 (737), pp. 243-244.

Accounts such as this, which lay bare not only an absence of heroism but an absence of, as Father Mathew suggested, solidarity and empathy for human suffering should be grounds for our reflection. We have also to place such an account alongside the extraordinary accounts of the visit of Queen Victoria to Cobh and Cork, during jubilant crowds of prosperous citizens, whilst unseen to the visiting monarch, those whom contemporaries termed ‘shadows and specters’, ‘ghastly skeletons’ and ‘phantoms’ wandered the streets of the city."