Frederick McKinley Jones was born on the 17th of May, 1893 to an Irish American father and an African American mother in Cincinnati Ohio. At a very young age, Frederick's mother deserted the family. 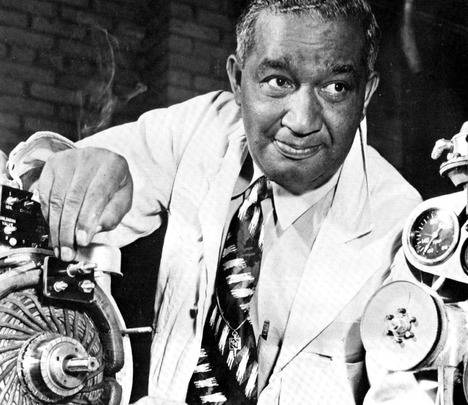 "Sometimes it's the people no one imagines anything of who do the things that no one can imagine" - Alan Turing.

Frederick McKinley Jones was born on the 17th of May, 1893 to an Irish American father and an African American mother in Cincinnati Ohio. At a very young age, Frederick's mother deserted the family.

At six years of age, his father, a railroad worker, felt unable to look after Frederick, deciding to temporarily leave him in the care of a local priest. By nine, his father passed away and he remained in the care of the priest until he left school after the sixth grade. Frederick returned to Cincinnati where he gained employment as a cleaning boy at eleven years of age.

By fourteen, Frederick was working as a mechanic, moving to Minnesota in 1912, where he worked for a huge farm in Hallock, where he remained for twenty years.

"Hallock was a place where a man was judged more on his character and ability rather than the color of his skin," Frederick said of his time at Hallock.

At the outbreak of the First World War, Frederick enlisted in the army. After completing his basic training, he was sent to the 809th pioneer infantry regiment and posted to France, where he wired camps and maintained Telegraph systems and mechanics.

After the war, Frederick moved to Minneapolis where he worked for a company that sold equipment to the cinema industry. While in this role, Frederick invented an automatic ticket dispensing device which he patented in 1939. According to MIT, he also invented the first process that enabled movie projectors to playback recorded sound, making talking pictures possible.

By the 1930s, Frederick co-founded a company called Thermo King Corporations. In 1937, he invented a portable cooling system for trucks, making it possible to carry perishable Goods without using ice which he patented in July 1940. During the Second World War, Frederick's portable cooling systems were used by the US military to transport food, medicine & vital blood stocks. By 1949, Thermo King Corporation was a $ 3 million business. To put it into context, in 1949, three dollars would be the equivalent of roughly thirty-four dollars in 2022. Thermo King cooling systems went on to be used in ships and trains.

Frederick Jones McKinley went on to achieve sixty patents including a portable X-ray machine during his lifetime before succumbing to lung cancer on the 21st of February, 1961.

In 1977, Frederick was posthumously inducted into the Minnesota Inventors hall of fame and in 1991, he became the first African American to be awarded The national medal of technology by president George Bush.

"Most engineers start at the bottom of a project and work up, but Fred takes a flying leap to the top of the mountain and then backs down, cutting steps for himself and the rest of us as he goes." (Saturday Evening post obituary 1961)