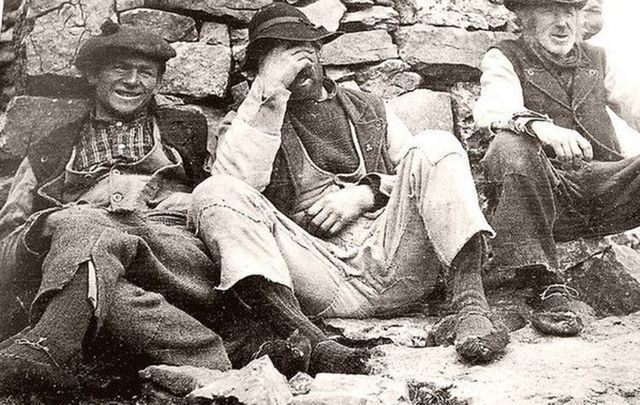 We all know and love Aran sweaters, but did you know that there's another apparel item the Aran fishermen are famous for? Pampooties are the original Aran Island shoes.

The Aran Islanders of Inis Mór, Inis Meáin, and Inis Oírr in Co Galway, were and remain brilliant craftspeople, and their signature shoes are no exception.

Pampooties were made of a single piece of raw, untanned hide, which was folded around the foot to fit and then stitched together with twine, or sometimes a leather strap.

Not only was the hide left raw, but often the hair was also left on because it gave the shoes extra traction.

Perhaps the only similarity between today's fast fashion and the hand-crafted pampooties is that they were not meant to last a long time, eventually rotting.

However, this was to their short-term advantage, as they retained moisture in Ireland's damp climate, which allowed them to remain flexible.

PAMPOOTIES ON THE ARAN ISLANDS! This Aran Islander is making, and wearing, pampooties. They were traditional shoes...

Posted by Ireland and Peg's Cottage on Thursday, September 28, 2017

The blog Archaeology.ie has a great example of a well-preserved pair of pampooties that were found in the 1950s by turf cutters in Co. Westmeath.

The influence of pampooties remain strong today, especially in the form of ghillies, the shoes worn by Irish dancers.

If you're looking for a pair of pampooties of your very own, historical re-enactment sites are the best places to look, whether to purchase or to get a pattern and materials so you can make you own – just like the Aran Islanders.