Believed to be the first color photos of Ireland ever taken these snapshots of the old life in Ireland, taken in Connemara and the Boyne Valley are astounding. 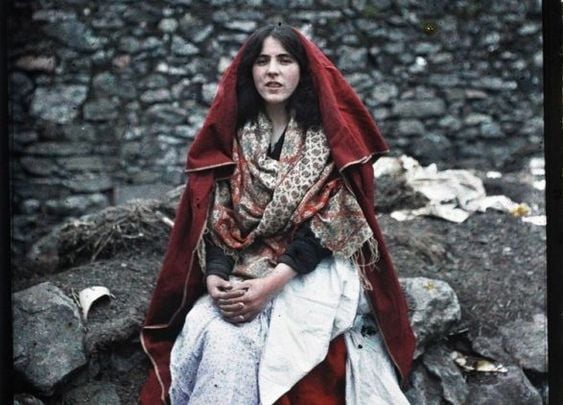 A 14-year-old girl wearing a traditonal cape, at the Claddagh, Galway, in 1913. Marguerite Mespoulet and Madeleine Mignon Alba

Believed to be the first color photos of Ireland ever taken these snapshots of the old life in Ireland, taken in Connemara and the Boyne Valley are astounding.

These stunning pictures, taken by Marguerite Mespoulet and Madeleine Mignon-Alba during their trip to Ireland in 1913, are believed to be the first color photos of Ireland ever taken.

The French women were part of a world-wide project titled “The Archives of the Planet.” French banker and philanthropist Albert Kahn created the project to compose a “kind of photographic inventory of the surface of the earth as it was occupied and organized by Man at the beginning of the 20th century.” His project captured some of the first color photographs taken in Ireland, the United States, Norway, Vietnam, and Brazil.

In 1931 Kahn was forced to abandon his project due to dwindling finances after he lost a fortune in the 1929 stock market crash. By then photographers had photographed World War I and taken 72,000 photographs from more than 50 countries.

Mespoulet and Mignon-Alba traveled throughout Connemara a native Irish-speaking region of County Galway and the Boyne Valley located in northeastern Ireland. They took photographs of everyday life showing women weaving and men building coracles, a type of small fishing boat. They also took photographs of historic sites such as Clonmacnoise and the round tower at Glendalough, which are still popular tourist destinations today.

Black and white photography had been around for decades, but color photography was cutting edge technology in the beginning of the twentieth century. The women, who were novice photographers, used this new technology developed by French inventors called autochrome color plates. Autochrome technology uses a glass plate coated with potato starch dyed red-orange, green, and blue-violet. The red of Galway girl Main Ni Tuathail’s traditional cloak is particularly striking in a couple photographs from Connemara.

Outside car on the route from Headford to Claregalway, May 29 1913.

Dr. Gilles Baud-Berthier, Director of the Musee Albert Kahn said on the museum’s website, “These were not works of reportage or ethnography, nor an attempt to produce works of art. The aim was simply to record human beings in all their diversity, living humble lives worthy of respect. And from this respect would, Kahn hoped, arise the universal peace to which he aspired.”

Several of Mespoulet and Mignon-Alba’s photographs depict thatch-roofed homes in Claddagh near the city of Galway. The houses were a typical home of Irish peasantry in the eighteenth and nineteenth centuries. Claddagh comes from the Irish “cladch” which means shore. Claddagh was a fishing community and its residents lived separately from Galway City. Claddagh residents retained their Gaelic customs, dress, and language in the 1930s, when most of the Irish island had modernized.

Much of Ireland had lost the Irish language after the Great Hunger in the middle of the nineteenth century. The houses shown in the photographs were razed in 1935 and a council housing scheme replaced them. Mespoulet and Mignon-Alba’s photographs helped capture an old Gaelic culture that was slowly disappearing.

The women’s photographs show the peaceful rural towns of the island on the eve of the First World War. They did not visit Dublin or Belfast. Both cities had been more industrialized than the rest of the island by the beginning of the twentieth century. Belfast had a flourishing shipyard industry that had built the Titanic a year before Mespoulet and Mignon-Alba’s visit. James Joyce’s collection of short stories, Dubliners, depicting a variety of characters in the hussle and bussle of Ireland’s capital, was published the year after their visit. Had they visited these eastern cities, they would have seen a very different side of Ireland.

Many of Albert Kahn’s photographs, including photographs of Ireland, are printed in "The Wonderful World of Albert Kahn: Color Photographs from a Lost Age" by David Okuefuna. Kahn’s color photographs are currently housed in the Musee Albert-Kahn just outside of Paris.