In 1916, the leaders of the Easter Rising took refuge in #16 Moore Street, the “Irish Alamo.” One-hundred years later the battle for the preservation of these historic buildings goes on. 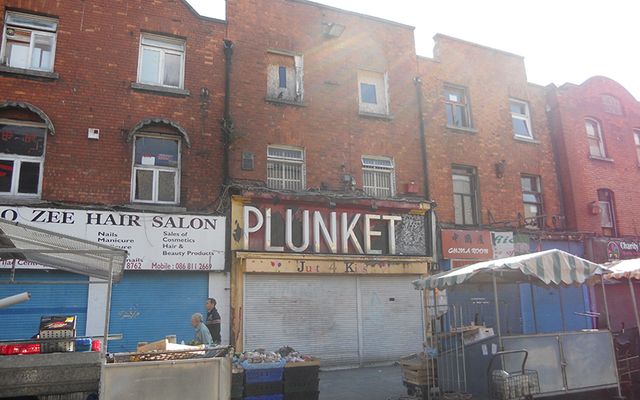 On Friday of Easter Week in 1916, with the General Post Office ablaze, the rebels evacuated across Henry Street into Moore Street. The street, home to the legend of Molly Malone, was under heavy fire as the Volunteers forced their way into buildings and dug their way into adjourning structures as they tried to recuperate from their GPO escape. Outside the legendary O’Rahilly would be struck down and die. Also, a London socialist Jew named Abraham Weeks, a great follower of James Connolly, would also die for a country he knew nothing about.

At #16 Moore Street five signatories of the Proclamation—Pearse, Connolly, Plunkett, Clarke and MacDiarmada—huddled to plot out their next strategy. That strategy would be surrender. Using nurse Elizabeth O’Farrell as an intermediary, Padraig Pearse, under white flag, walked with O’Farrell down Moore Street to the corner of Great Britain (now Parnell) Street and surrendered. The revolution, for the moment, was over.

To say that Moore Street has become a political football is an understatement. Since the millennial, Moore Street has become another kind of battleground as developers have cast their eyes on it. It seems that the future of Moore Street market—and the historic buildings that the rebel leaders occupied—is tied to the development of the east side of Upper O’Connell Street, which now mostly lies barren since the closing of the Carleton Cinema and the demise of the Royal Dublin Hotel. The Chartered Land Group had planned a €1.25 billion retail and residential project which would have reached back as far as Moore Street to the west.

Chartered Lands plans threatened #16 Moore Street and the surrounding buildings and protests followed. The public, members of the local and national governments, and ancestors of the several of the 1916 martyrs, including James Connolly Heron, Eamon and David Ceannt and Proinsias Ó Rathaille, rallied to the defense of the buildings.

In 2006, numbers 14-17 were designated a national monument by the government and a preservation order was placed on them.

In 2014 Nama, which inherited the loans of Chartered Lands, proposed an inane swap of numbers 14-17 with numbers 24-25. Finally, the national government stepped in and bought the buildings for €4 million.

In early 2016, the Department of Heritage planned to demolish buildings on either side of numbers 14-17. Dubliners took to the street and blocked workers from entering the buildings for six weeks. The case was taken to the High Court and Justice Max Barrett stopped work. Finally, Justice Barret declared that not only Moore Street, but the surrounding streets and lanes, were a National Historic 1916 Battleground. Unbelievably, Heather Humphreys, the Minister for Heritage, appealed. The court decision on that appeal won’t be announced until very late in 2017.

Apparently, Humphreys can’t make up her mind about Moore Street. Recently, she endorsed a proposal by the Moore Street Consultative Group that, according to the Irish Times, “would include the retention of historical structures and the ‘line and form of the block’ from 10-25 Moore Street; the pedestrianisation of the street and surrounding lanes; the upgrading of the market trade facilities and a review of the trading byelaws; and the restoration of historic buildings, including the National Monuments buildings at number 14-17 Moore Street. Crucially, the report recommends not only the protection of the street itself but its back lanes, including O’Rahilly Parade, Moore Lane and Henry Place. These were due to be levelled as part of the Dublin Central Shopping Centre development.”

The Irish Times also reports that Humphreys said the report “can help find a way to breathe new life into the Moore Street area, while at the same time retaining its sense of history and enhancing its traditional street market.”

In 1916, the leaders of the Easter Rising took refuge in #16 Moore Street, the “Irish Alamo.” One-hundred years later the battle for the preservation of these historic buildings goes on.