WATCH: A colorful look at 1940 Dublin, "a city of romance and contrasts"

"Dublin, Capital City of Ireland," now streaming via the Irish Film Institute, provides a panorama of Dublin in 1940. 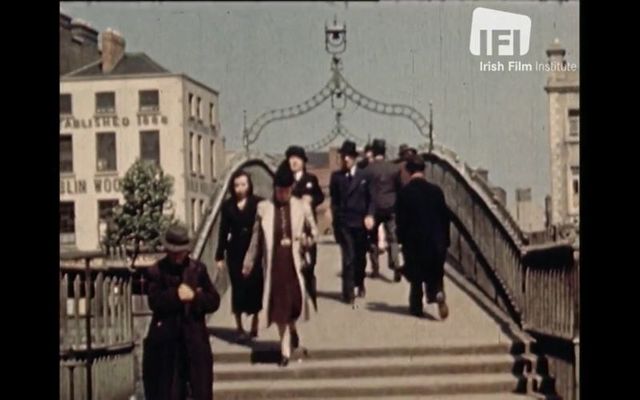 "Dublin, Capital City of Ireland," a ten-minute Irish travelogue from 1940, is now available to stream for free on the Irish Film Institute's IFI Archive Player.

This silent tourism film made for the Irish Tourist Association (the precursor of Bord Fáilte and Fáilte Ireland) provides a warmly-hued panorama of 1940s Dublin.

Dublin is presented as a city of romance and contrasts which has survived countless changes through a thousand years of history.

On this particular day, Croke Park was packed to capacity as Limerick took on Kilkenny in the 1940 All Ireland Hurling Final.

Going into the city centre, Dublin trams can be seen passing through a busy O’Connell Street, past Nelson’s Pillar (now home to The Spire) towards Bank of Ireland on College Green.

The infamous Moore Street Market is a hive of activity, full of busy shoppers looking for a bargain, in complete contrast to the tranquil gardens of Stephen’s Green, where people are sprawled out on sun loungers making the most of a blissfully sunny day.

As the film proudly states, “to the visitor, it is a city of pleasure offering every amenity for enjoyment and happiness."

"Dublin, Capital City of Ireland" is a part of the IFI's Bord Fáilte Film Collection.

“Dublin, Capital City of Ireland” is published here with kind permission of Fáilte Ireland and thanks to the Irish Film Institute (IFI), who IrishCentral has partnered up with throughout 2022 to bring you a taste of what their remarkable collection entails. You can find all IrishCentral articles and videos from the IFI here.